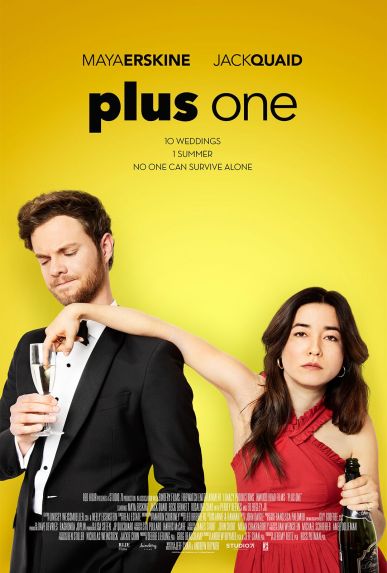 Two longtime best friends face the inevitable in this funny romantic comedy from the duo of Jeff Chan and Andrew Rhymer.

Ben King and Alice Mori have been friends for ten years. Both have had their issues with relationships. Ben is dealing with his father who is about to enter his third marriage. As for Alice, she has ended a long-term relationship with her most recent boyfriend, Nate Lam. When Ben and Alice get invited to a summer of weddings of their closest friends, they decide to become each other’s “plus one”. As they attend the weddings, Alice attempts to get Ben hooked up with various women, but for some reason, Ben is afraid of commitment.

In the middle of summer, Ben and Alice find themselves miserable until the two realize that there could be something more between the two. The two find themselves attracted to each other and a stroll through the graveyard causes them to do the inevitable. Soon enough, Ben and Alice have found themselves in a relationship and they seem happy. However, when they attend Alice’s sister’s wedding, Ben makes the mistake of rethinking things and this causes a rift between the longtime friends turned couple. Will Ben be able to realize his mistakes, or will he lose the one person he really ever cared about?

From the duo of Jeff Chan and Andrew Rhymer comes this romantic comedy that has something special with it and that is the fact that the film is set throughout the course of a summer full of weddings. The film also delves into the fact that we have two longtime friends who have never felt any attraction towards each other and become each other’s “plus one” face the inevitable in terms of having a romantic attraction that goes quite well until an incident threatens to destroy not only their love but their long-term friendship.

Jack Quaid and Maya Erskine are perfectly cast in the central roles of Ben and Alice. The two have that “opposites attract” chemistry that makes the film work. Ben is the afraid of commitment yet yearns for love type and it is all because he has some sort of PTSD in terms of his father having been married twice and on his way to wife number three. As for Alice, she is a foul-mouthed woman who is quite blunt about everything and in her case, it could be an outlet for her recent heartbreak. These two are the driving force of the film and despite their difference in personalities, these two seem to fit together to a tee.

There is a great supporting ensemble cast. Saturday Night Live cast member Beck Bennett makes a limited appearance in the film but makes the most of his screen time as Mike, Ben’s buddy who in his time of need, becomes the voice of reason. Ed Begley Jr. is both emotional and funny as Ben’s father, who attempts to make Ben his best man, but Ben’s reservations get the best of him. Rosalind Chao does the “Tiger Mom” bit perfectly as Alice’s crazy mother, who between getting things ready for her older daughter’s wedding, berates everyone in her path. Of course, this being a romantic comedy, one can guess how this ends up, but at the same time, being there through out the course of the summer will make one happy they went along for the ride.

Plus One is a fun romantic comedy that caters to both genders as the viewer goes in on a fun ride with these two friends who are destined for something bigger.