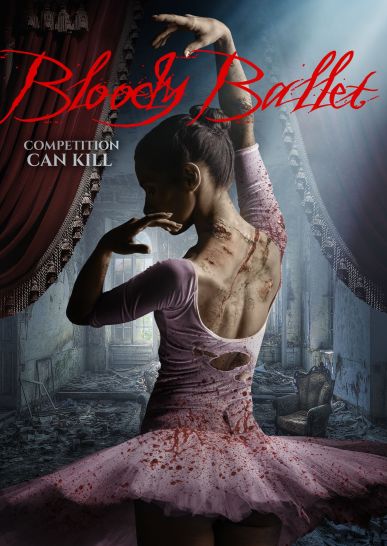 A series of brutal murders bring to light this tale of terror that may remind reviewers of the classic and reboot of Suspiria but offers something different in a good way.

Adriana Mena is an aspiring ballet dancer who has just landed the lead role of the upcoming Nutcracker. She still has been traumatized by an incident regarding her past, and has been visiting her therapist, Dr. Carlina Cassinelli. Dr. Cassinelli has given Adriana an experimental drug in which she hopes can help her conquer her past demons and be able to perform in the show.

Some are excited for Adriana finally getting the lead while others clearly show moments of jealousy. Things go from bad to worse when a mysterious masked woman begins to pick off the dancers, killing them in brutal fashion. Meanwhile, an investigative journalist has been trying to figure things out and finds himself connected to a mysterious entity who may or may not be the key to stopping the brutal murders that have plagues the ballet school.

When you see the name Bloody Ballet, it might set off an alarm that might make viewers think this is a rip-off of Suspiria. Well, while that may seem true and the fact that director Brett Mullen had made this homage to the Italian giallo subgenre of horror films, the film does offer something very different in terms of both its storytelling and execution. The film deals with the supernatural, a serial killer, and struggling with past demons.

Kendra Carelli gives quite a performance as Adriana, the embittered young dancer who while she is happy to be finally nabbing the lead role in a play, still struggles with demons from her past. Her nightmarish visions tend to make her what go either route in terms whether she is our serial killer or perhaps being fattened up for the kill as a potential victim. It brings to mind some twists along the story that make some wonder and guessing who is the serial killer who is executing the dancers in such ways that would make the likes of Dario Argento, Lucio Fulci, and Mario Bava proud.

Debbie Rochon may be known more for her iconic role as a screen queen, but it’s a welcome against type role here as Dr. Cassinelli, Adriana’s therapist who truly cares for her and attempts to do what she can to help her. Even if she has a bit of an attraction to her as seen in one scene. To see Rochon play it straight-laced shows the level of acting she is capable of and perhaps, viewers will be able to see her in more roles like this. Caroline Williams makes the most of her role as Ms. Valli (a nod to our aforementioned Suspiria, perhaps named after actress Alida Valli who played Miss Tanner in the 1977 original), the director of the ballet school who begins to worry when her dancers begin to disappear.

Kudos go out to the special effects team behind this film. They truly pay homage to the giallo horror film with the methods of killing. There is plenty of gore to appease the fans along with eye gougings, disemboweling, and in the case of one victim, homage to Tom Savini’s The Prowler with a knife going through a skull from the top. What is even more outstanding is the final ten minutes, which offers a very shocking jaw-dropping twist that just makes this film stand out quite well for an indie horror film.

Bloody Ballet not only brings Suspiria to mind, but offers something more in the grand scheme of things, with some great performances notably from Kendra Carelli and Debbie Rochon, and a jaw-dropping twist that makes this one for horror fans to check out.