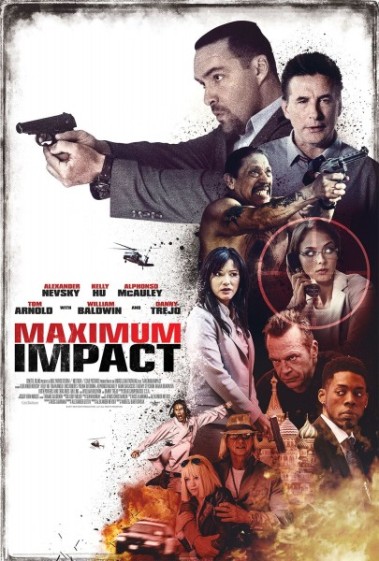 Alexander Nevsky returns and this time, he may have found his most successful film to date with a combination of a fun ensemble cast, the director of Romeo Must Die, and the writer of the original Rush Hour.

Since the end of the Cold War, relations between the U.S. and Russia have not been great. To ensure the continuation of “glasnost”, the United States is planning to send their Secretary of State to Moscow for a secret meeting with the Russian Secretary of State. Assigned to the task force are Kate, Barnes, and Robinson. Assigned to the FSB team are technical expert Maxim Kadurin and agent Andrei Durov. However, a botched job involving unscrupulous businessman Sanchez has forced Durov to switch places with Kadurin.

Tony Lin is a former action TV star who has been hired by a mysterious man with the sole intention of assassinating the U.S. Secretary of State. However, when Maxim uses his wits to prevent the assassination from happening, Lin finds himself in a crisis. However, when he learns that the Secretary’s granddaughter Brittany has stowed away and is in Moscow as well, Lin comes up with a new plan of kidnapping her. However, when she finds herself on a day-long adventure with a Russian pop star, Lin really finds himself in a pickle and to make matters worse, Maxim and Kate were assigned to watch her and now the race is on as to who will get to Brittany first.

Russian powerhouse Alexander Nevsky’s films have drawn both cult value and ire amongst film fans. However, with some of his recent films such as Black Rose and Showdown in Manila, it seems like the level of his films are slowly improving, making it clear that he makes the most of his budget. However, his latest film is truly a step above his previous film not only in terms of budget, but joining forces with the director of Romeo Must Die and the writer of the original Rush Hour to help him come up with the story and write the screenplay.

What’s interesting in this film is that Nevsky doesn’t necessarily have to do a lot of action in this one, at least not until the finale. His character of Maxim is more a street smarts type of guy who is more of a technical expert when it comes to computers. Perhaps because of a build-up and to show that just because one is a 6’4” big guy, doesn’t mean you always have to be relegated to play big action types. Nevsky takes at least 80 percent of the role and plays it straight and does well when teaming up with Kelly Hu, who plays the more badass Kate, whose introduction scene involves beating the heck out of Tom Arnold and Keith Powers in a boxing ring.

Hu, Arnold, and Powers are just a part of the ensemble cast, who just seem to have fun in their roles. Especially Mark Dacascos as villain Tony Lin, a former TV star who is now working for a mysterious man, played by William Baldwin. Dacascos purposely goes over the top at times, but for some reason, it works, especially when he is seen talking in German to a former fan of the show and his chemistry with Matthias Hues, as Lin’s number one man Ian, is fun and engaging. Bai Ling only makes a one scene cameo as an assistant Secretary of State who tends to have some strange relationship with Alphonso McAuley’s Robinson, who somehow pulls off Eric Roberts’ voice quite well when he is impersonating the Secretary of State in a series of prank calls. Russian actor Evgeniy Stychkin brings even more comic relief as field agent Durov, who is relegated to doing techie work with constantly disastrous results.

While those who love action comedies may find a few gags slightly overwhelming and repetitive, such as Arnold’s character of Barnes constantly having to go to the bathroom, the action does bring a sense of complement to the film. Under the supervision of James Lew, the action allows Mark Dacascos to showcase some of his martial arts skills and brings more close quarters combat in terms of Nevsky and Hu. However, in one shocking move, the film’s first action sequence literally comes within three minutes of the film with Stychkin’s Durov taking on some of Danny Trejo’s men and the use of wirework and hysterics sets the tone for the film. Once that scene is over, you will know what you’re going to be in store for.

He may have been in the industry about two decades, but Alexander Nevsky has finally hit gold with Maximum Impact. The winner of three awards at the Action On Film festival is deserving of its awards with a fun ensemble cast, the director of Romeo Must Die, and the writer of Rush Hour, everything meshes well even if some of the gags tend to be a little too much.