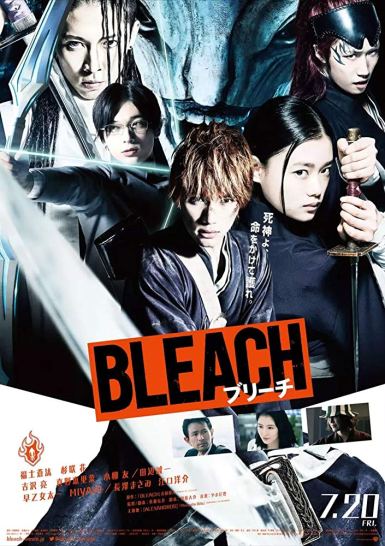 Tite Kubo’s beloved manga turned anime finally has a live-action adaptation that thanks to the performances of its cast, makes this a worthy adaptation to enjoy.

High schooler Ichigo Kurosaki is a young man who has a certain ability that no one in his class has and that is the power to see ghosts. Having a high spiritual energy, his life will soon change when a monster known as a Hollow causes a major accident in his home. Ichigo meets Ruria Kuchiki, a Soul Reaper disguised as a human girl. When Rukia’s powers are limited against the Hollow, she decides to transfer her power to Ichigo, who becomes the new Reaper, but it has come with a price.

Rukia is convinced that Ichigo has what it takes to become a Reaper if he is willing to undergo her training. Ichigo doesn’t want the powers, but only used it the one time to protect his family. Nevertheless, Rukia warns Ichigo there are more Hallows coming. However, what Rukia is not prepared to tell Ichigo that her transfer of power is a direct violation of the Reaper Code, which infuriates her brother-in-law Byakuya and his number one, Renji Abarai. To make things even more worse, Uryu Ishida, a fellow student, is revealed to be a Quincy, an expert archer who is after Hollows for his tribe’s death. Will Ichigo be able to withstand everything that has come his way and find his destiny?

When it comes to live-action adaptations of Japanese manga, it is clear that after the success of titles such as Rurouni Kenshin, Assassination Classroom, and Gintama to name a few that Hollywood truly needs to learn a thing or two. The latest of these adaptations, Tite Kubo’s title about a high schooler who becomes a soul reaper, has one thing that most adaptations don’t: Kubo was potentially going to be involved with the film, even worrying about how to go about bringing Ichigo’s look to life as the character has bright orange hair, but yet his put his faith in the filmmakers and they did enough to even impress him.

The film is a reunion for those involved with Takashi Miike’s live-action adaptation of Blade of the Immortal. The actor who played the main villain, Sota Fukushi, does a complete 180-degree and despite some skeptics at first look, is great to watch as our hero Ichigo. Sporting a variation of the orange hair, Fukushi looks the part meant for a live action adaptation. Hana Sugisaki, who played Rin in the Miike film, brings a range of negative emotions as the reaper Rukia, who becomes Ichigo’s mentor and eventual friend, much to the chagrin of the very arrogant Reaper leader Byakuya, played by pop star MIYAVI, who sang the theme song to Miike film.

The supporting cast proves to be quite interesting as well and do quite good jobs. Veteran Yosuke Eguchi brings a bit of comic relief as Ichigo’s dad along with Erina Mano as Orihime, a fellow student who harbors a major crush on our hero. Gintama’s Ryo Yoshizawa brings a sense of mystery as Uryu Ichida, the Quincy archer who has a love-hate relationship with the Reapers. Rounding out the core cast in what can be described as a near- Nicolas Cage-worthy performance is Taichi Saotome as the maniacal henchman to Byakuya, Renji Abarai.

The action sequences are truly worthy of what to expect in a live-action adaptation of a manga. The CGI for the Hollows look quite impressive and at times, brings a scare to fans with their looks and actions. When Ichigo and crew go into action, the swordfighting is amazing and lives up to being faithful to Kubo’s vision in the distinct styles used in his manga.

Bleach is up there as a worthy adaptation of a Japanese manga. Sota Fukushi, Hana Sugisaki, and MIYAVI are great in the film as well as the action sequences. If you like the manga, then you will like this film.