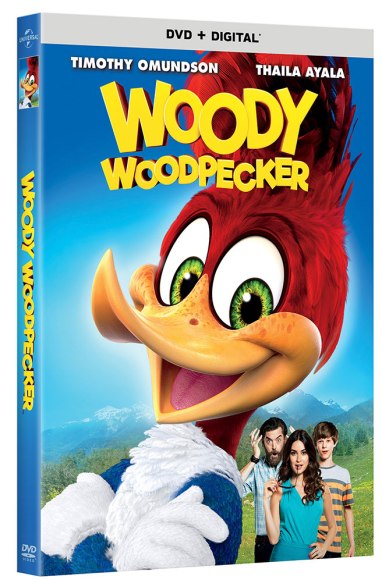 The latest in a classic cartoon going to live-action form, the lovable but mischievous woodpecker’s adventure has its moments.

Lance Walters is a lawyer who just lost his job because of an interview he made going viral. He has learned that his grandfather left him a major piece of property among the Canadian border. He decides to build an estate and flip it for a profit. He takes his gold-digging fiancé Vanessa and his son Tommy, only after Lance’s ex-wife must visit her dad in the hospital. Lance and Tommy do not get along and Vanessa can’t stand Tommy as well.

When Lance begins his project, Woody Woodpecker learns of what has happened and decides to try to stop Lance at all costs. However, Woody also befriends Tommy, who feels like he doesn’t belong. That is, until he meets local teens Jill and Lyle and the trio decide to form a band. However, Lance is the least of Woody’s problems as two brothers, who have been poaching animals in the area, want Woody, who is the last of an endangered species.

The first announcement of this live-action adaptation of the classic Walter Lantz novel was a Brazilian trailer, due to the fact that the film was marketed to Brazil. The character, a mischievous woodpecker who has a distinct laugh (made famous by Lantz’s wife Grace Stafford, who voiced the character for a whopping 4 decades before her passing in 1992), is huge in the South American country. So how does the film fare out in terms of American family films? It’s what one would normally expect.

The film seems to have taken a page from the Furry Vengeance book of rules in terms of “don’t mess with mother nature”. Galavant star Timothy Omundson plays the former lawyer who still looks for a good deal and decides to make an estate on land left to him by his grandfather. Of course, he’s the one who “has to learn a lesson” and changes himself in the process. He goes from being quite overbearing to someone who learns the true relationship not just with nature, but especially with his son Tommy, played by Graham Verchere.

As mentioned the Brazilian market was key for this film so what better way than to bring a Brazilian actress to the mix. Thaila Ayala is that actress, who plays the gold-digging Vanessa, who goes to admit she never liked kids especially when she was one, this causing loads of friction between herself and Tommy. However, it is Vanessa who gets more of the hijinks caused by Woody not so much Lance. While Lance may get the occasional hit, it is Vanessa who truly gets the brunt of it. Scott McNeil, a respected voice actor, and Adrian Glynn McMorran play the hillbilly poachers who play the typical stereotypes and like Vanessa, get a brunt of Woody.

The major issue is that Woody’s voice, done by voice actor Eric Bauza, is not so much as high-pitched as Stafford’s. It is was one of those things one would have to get used to when it comes to going through the film. It’s not that Bauza is a good voice actor, because he is. It is just that he just didn’t seem to mesh when it came to voicing Woody Woodpecker at first and it does improve very little as the film runs.

Woody Woodpecker has its moments, and it is what you would expect in a family film based on a classic. Just try getting used to the new voice of Woody and you just may end up really enjoying it with the kids.