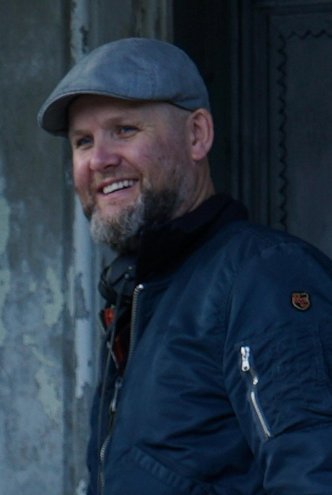 Irish filmmaker Brian O’Malley got his start as a sculptor before making the transition to filmmaking. After making a few short films, O’Malley gained a fanbase with his 2014 feature film directorial debut, Let Us Prey, which won him the Méliès d’Argent for Best European Fantastic Feature Film at the Belgium International Film Festival. O’Malley follows it up with the gothic horror film The Lodgers, which makes its world premiere this Friday (September 8) at the Toronto International Film Festival at 7:15pm.

World Film Geek got the chance to talk to Brian O’Malley about the film and what to expect in it.

First of all, thank you Brian for talking about The Lodgers. I can just imagine how excited you are about its upcoming world premiere at the Toronto International Film Festival.
Yes! I’m really looking forward to it. I’m very excited!

So, before we talk about the film, I understand you started as a sculptor. What led you into filmmaking?
Well, what happened was I was studying fine art in college and I was specializing in sculpture. I didn’t really fancy being a starving artist, so I thought what could I do with sculpture and make money out of it? So, one of the suggestions was model making for feature films.

So, I did that and I was watching a lot of movies like Blade Runner on VHS. I watched it every night for about a month. I was blown away by it, even though I have seen it before. But as an adult, I was so blown away by it that I decided I didn’t want to be a sculptor anymore, but rather a director. And that’s pretty much how it all started.

That’s great! Let’s talk about The Lodgers. In your own words, without giving any spoilers, how would you describe the film?
An elegant Gothic ghost story about two twins who come face to face with an ancestral curse. Was that too short? (Laughs) I didn’t give anything away (Laughs).

That’s totally fine (Laughs). Did you endure any difficulty while making the film?
The biggest challenge was actually shooting the underwater scenes. That was quite a challenge. What we had to achieve was quite complicated. And the fact we had to shoot multiple shots. And what I find interesting is when you’re on the set shooting, you can shoot anywhere between 28 and 35 set-ups a day. However, when you’re shooting underwater, you can only do about 10 or 12 a day. Your storyboards are pared back to the actual minimum. And the actors have to be there so it was very challenging, but I think we got what we needed.

I think they will come together, be clear and bring what I can say is a dramatic climax to the story.

What was it like with the cast on the set and what can we expect from them in the movie?
Working with the cast was a dream for me. Every single person was an absolute pleasure. Charlotte [Vega] and Bill [Milner] were really great as the twins and they have a special bond that they developed before the shoot. So, when the cameras weren’t rolling, they were really excited and had a lot of fun because they are both young. And when they to shoot the heavy-duty scenes, they were able to get through them very easily because they felt comfortable with each other. They were very much like brother and sister. It was very easy to push themselves very far so they were just a pleasure to work with. And Eugene [Simon] was a real warrior on the set. He didn’t ask for much and he was really dedicated. On top of that, he is a true gentleman.

As for what to expect, I think Charlotte will give out a mesmerizing performance. She is someone who I think will become a star. She’s really something special. Bill really brings out a tragic performance of a “boy-man” who is being forced to go down a path he really doesn’t want to go but he’s compelled to do it out of fear. So, I think that’s tragic for him. And as for Eugene, he’s someone who is compassionate towards Charlotte and that will bring certain suspicions of people and add the fact that he suffers from his own inner demons and the demons of both his conflicts and the ancestral curse.

One of the surprise castings for me is, well, I am a fan of the Harry Potter films and I was quite surprised to see Mr. Filch himself in the film. What was David Bradley like on the set?
Well, David Bradley is as nice a guy as you can get. And the first time I met him was actually the first morning we began shooting the movie. He’s an absolute gentleman. He’s really an affable, friendly, guy and interestingly enough, the types of characters he plays are quite the opposite. But he is nothing like that. He’s a sweet gentleman and an absolute pleasure to work with.

And for Bill and Charlotte, it was pretty exciting because they are at the age where as kids, they have seen the Harry Potter films. On the set, where is a scene where David would knock on the door and Bill and Charlotte would be behind them. They would look at each other and Bill would point at the door and ask Charlotte, “Can you believe it?” They couldn’t believe they were shooting the film with him and of course, when they open the door, there is David acting all stern and hard-faced. However, she was quite taken by the fact that she was working with him and he was just an absolute joy to work with. We worked with him for three days and we didn’t have to ask much from him.

Finally, as we approach the Toronto International Film Festival, what do you hope fans will get out of the film?
Well, first, I hope from my viewpoint that there is a progression of my directing ability. To see what I am capable of and beyond.

And I also hope to see, from what the fans like in terms of this cinematic style, continues with this film but in a very different way. I hope it attracts fans of classic ghost stories, like The Others and The Orphanage, as well as fans of vintage horror films like The Innocents. I hope they will find something in the film that appeals to them for similar reasons, like a modern take with a dark sensual undercurrent that’s going on in the film.

That’s awesome! Well, The Lodgers will make its world premiere at the Toronto International Film Festival on September 8 at 7:15pm. I hope anyone who will be attending the festival will get a chance to check out this film and support you. Thank you so much again Brian for talking about the film.
Thank you so much! I hope we get to talk again when I make my next film!

I’ll be looking forward to that!

One comment on “Unleashing “The Lodgers”: An Interview with Director Brian O’Malley”