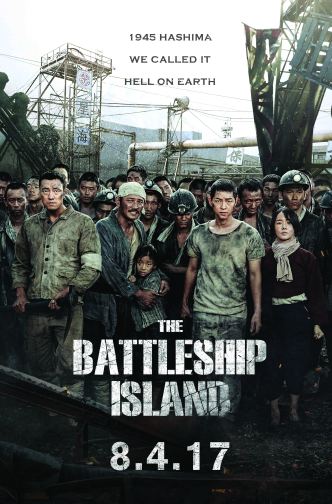 Veteran director Ryoo Seung-Wan takes on this film inspired by true events depicted near the end of World War II that makes good use of its cast and location.

In February of 1945, Korean-born bandleader Lee Gang-Ok is in Japan, performing with his daughter Sohee, when a band of Japanese soldiers arrive. Gang-Ok and Sohee soon find themselves captured along with at least four hundred other Koreans. Forced on a ship, the group heads for Hashima Island, nicknamed the Battleship Island. It is there where the men are forced to work hard labor while the women are forced to work in the comfort section.

Alongside Gang-Ok is reputed gangster Choi Chil-Sung, who despite being Korean and facing the odds, will not let the more superior Japanese get to him. Eventually dealing with traitors both within his ranks and those who conspire with the Japanese to save their own hide, Choi will not budge. When a respected Japanese leader of the labor camp is killed, some of the Koreans’ true colors are revealed. It all comes ahead when those who have survived and endured more than their fair share decide to hatch a plan to escape the island.

Action film director Ryoo Seung-Wan has been known for mainly modern-day action thrillers, so for him to tackle a historical-style film may seem somewhat new to him. This film clearly states that it was inspired by actual events, where Hashima Island was known for its coal mines and in fact, from the 1930s to the end of World War II, Koreans were forced on the island and it became a labor camp. However, the film mainly is fictitious and in addition, the film wasn’t shot on the island itself, but sets built in Korea.

Despite the obvious, it is still not a bad film. The film can basically be said to be a meshing of a Ryoo Seung-Wan film set in historical times. It does help the cast makes the most of their roles in the film. Hwang Jeong-Min, who reunites with Ryoo after their hit 2015 action film Veteran, plays the big band leader and caring father who not only must deal with the situation he is forced to endure, but also bring a strong sense of parenthood when it comes to his young daughter Sohee, played by Kim Soo-An.

So Ji-Sub makes the most of his role as the very tough yet very good-natured gangster Choi, who to show not only his tough side and knowing what’s at stake, challenges a Korean-born labor boss to a fight and uses the environment to defeat his adversary, this giving him a sense of respect amongst both Koreans and Japanese. The same goes for Hwang’s Gang-Ok, whose musical background, gives him somewhat of a strong foundation and in some aspect, earns him respect with some of the Japanese guards. Back to Choi, along the way, Choi shows his good-hearted side when he falls for Oh Mal-Nyeon, a fellow Korean who is forced to be a comfort woman. Their chemistry is not too bad for a bit of a subplot.

The piece de resistance is the action-filled finale, where the Koreans decide to escape the island at all costs. This leads into a war worthy of these types of films as the Korean resistance takes on the Japanese labor commanders and the guards. Lots of gunfire, knife fighting, and explosions drive this set piece and in an ironic move, the date of the escape just so happens to be a day forever remembered in World War II history.

When it all boils down to it, The Battleship Island may not be historically accurate and yes, it may cause some kind of controversy. However, Ryoo Seung-Wan made it clear that it is meant to showcase war turning men into something they never expected and not make it an anti-Japanese film, which shows when it comes to lead characters Gang-Ok and Choi having some sort of respect from both sides. For his first historical epic, it’s not perfect, but it’s not completely terrible either.