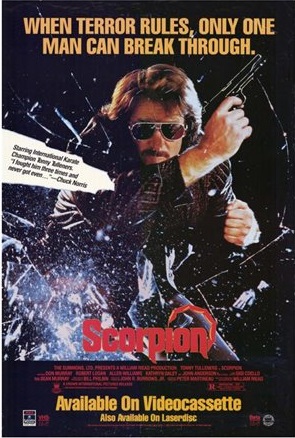 Tulleners plays Steve Woods, a covert agent for the Defense Intelligence Agency with the codename Scorpion. When he learns of a skyjacking, he goes undercover as a police officer to ensure the safety of the terrorists. When he is confronted by Faued, the terrorist group responsible, he uses his martial arts skills and shoots down the last terrorist, saving the hostages. However, when his actual name is published in the papers, his covert days are officially over.

He begins to work for Gifford Leese, whose unit is assigned to protect a terrorist who is willing to cooperate with the government. When Steve is in charge of the protection unit, he relies on his longtime friend Phil Keller to protect Mehdi. However, two rogue men working for Faued, Wolfgang Stoltz and Jack Devlin, arrive and shoot down Phil and Mehdi. When Steve gets wind of the situation, he decides to wage a one-man army against the rogues and Faued once and for all.

Many martial arts champions have transitioned from the ring, circle, and cage to films. Some have had successful careers in movies while others either middle of the road or made one film and left. For 1965 World Karate Champion Tonny Tulleners, this would be his only film appearance as Crown International Pictures and filmmaker William Riead made the film just for Tulleners. It is somewhat unfair to say Tulleners is a bad actor, because he never had that experience or knowledge about action. Somehow, he makes it through, despite having the look of more like an 80’s TV action star than film star.

The supporting cast is quite interesting. Don Murray’s Leese seems to have issues when it comes to the mission at hand. He goes from happily hiring Steve to becoming a loose cannon when not only does the mission get blown, but goes as far as begin to accuse Steve without accurate proof of possibly going double agent. Robert Logan of the Wilderness Family trilogy of 70’s family films, does well as one of the few people loyal to Steve and helps him with the mission. Interestingly enough, for this brand of action film, one would expect some sort of love scene. However, that is not the case here and that’s a good thing as it would hinder the film more, yet we are introduced to Steve’s girlfriend at times as she tries to console and offer advice while he has his mind set on revenge.

Another interesting factor is that there isn’t a lead villain in all this chaos. The villains are actually an organization made up of namely Middle Eastern terrorists and two rogue assassins, one German, the other African-American. While this brand of thing was accepted back then, one can only diversify the cast if this were ever to be remade as some sources say that Bullitt was a major influence in this film.

While there is no fight choreographer for the film, one has to give kudos to legendary stunt coordinator Dar Robinson. Many will feel disappointed that Tulleners doesn’t have the chance to really shine in the martial arts department. His first fight scene is set in Spain, where he takes on a peeved bar customer and his goons. From the way he moves, it is clear Tulleners has a pure karate background as this fight looks reminiscent of fights in Kill or be Killed. While Tulleners doesn’t get much time to really showcase his skills, he does make the most of his fight scenes. He does have a decent spinning back kick that he uses on a number of occasion and his straight punches look like they hurt, especially when B-movie icon John Lazar, who plays a Faued member, gets his in a brief fight against the karateka.

Scorpion, in all, is a decent 80’s spy action film. Where Tulleners lacks in the acting department, makes up for in his martial arts skills, despite the limited amount of time he has to showcase his moves. Definitely a popcorn film on a Saturday night if and when you have a VCR or perhaps a DVD player in hand.