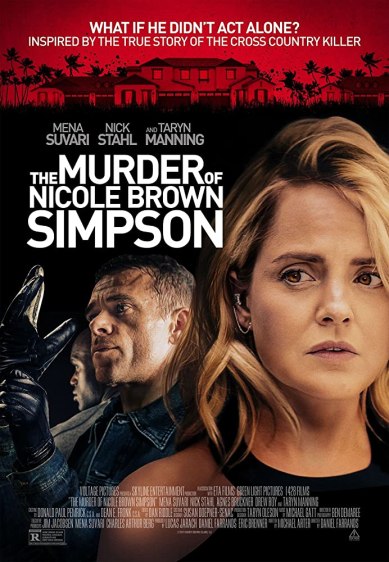 From the director who brought you The Amityville Murders and The Haunting of Sharon Tate comes this film that gives a possible theory about the infamous 1994 murder of our titular character.

Nicole Brown Simpson was once married to football legend O.J. Simpson. However, they have divorced and since then, Nicole as found support in the form of best friends Faye Resnick and Kris Jenner. She also finds a friend in Ronald Goldman, a waiter at Nicole’s favorite restaurant. One day, Nicole meets a mysterious man named Glen, who was working at her neighbor’s home. She hires Glen to help finish painting her place due to Faye’s inability as an interior decorator to finish her place.

As Glen spends the next few days working hard, Nicole develops an attraction to Glen. The two ends up sleeping together but the affair is short-lived when Nicole hears Glen talking to himself and going a bit crazy. The paranoia begins to affect Nicole and when she attempts to reach out to her neighbor, she discovers that she had been missing for the past few days. Soon enough, Nicole learns the terrifying truth about Glen and finds herself in a situation that will change the course of U.S. history forever.

You have got to hand it to Daniel Farrands, the visionary director behind perhaps two of the greatest documentaries of horror, Never Sleep Again and Crystal Lake Memories. He has taken real-life events as the basis for some of his feature films and added some twists and turns, making them all the worthwhile and asking the viewer, what if this actually happened? The Amityville Murders, which would inspire the classic horror film The Amityville Horror and The Haunting of Sharon Tate, depicting the 1969 murder of the titular actress added quite a few twists and intricate weaving that make them a little dash of “alternate history” and they work so well thanks to his vision.

His latest entails the 1994 murders of Nicole Brown Simpson and Ronald Goldman. Mena Suvari plays Nicole as a woman who finds herself constantly victimized at one point or another. If it’s not getting ridiculed by the LAPD because of their connection to her ex-husband, played in a brief cameo by Gene Freeman, it’s the fact she finds herself in constant fear after her “affair” with Glen, played by Nick Stahl. Stahl seems to be one of those actors who when he was a kid, played good-natured roles and as he got older, gave off the vibe to play really bad people. Look at Bully and now this film. And Glen in this case, is Glen Rogers, the infamous Casanova Killer, who actually killed many women during a cross-country spree.

What Farrands did to bring this theory was combine real-life footage with the possible re-enacted footage. And the idea of Rogers being the possible killer came from a 2012 documentary in which Rogers’ brother claims that his brother pretty much confessed to the murders. While the story is wholeheartedly executed quite well, one note of interest to see here is that the day before the murders, we see Nicole having a nightmare and sent up the wall a la Tina in A Nightmare on Elm Street minus the slashes of course. And it seems like Farrands have brought in some good friends to help with the film. Friday the 13th Part III victim turned anchorwoman Tracie Savage plays herself in some news reports while Larry Zerner, whose Friday the 13th Part III character of Shelly gave Jason his now iconic mask, plays the neighbor who discovers the bodies.

If there is a flaw in the film, it is Taryn Manning’s take on Faye Resnick, who is depicted as a drunken fool who is implied to have a “thing” with Nicole before her fling with Glen. However, one can only give kudos to Agnes Bruckner’s take on Kris Jenner as if you have watched Keeping Up with the Kardashians, Bruckner gives on a spot-on impersonation of Jenner here.

The Murder of Nicole Brown Simpson is a very dark and intricate portrayal of what could have happened in the events that led up to the 1994 murders that rocked L.A. and the nation. It gives the theory of possibly either O.J. Simpson not acting alone or even, not doing it at all. Mena Suvari churns out a very excellent performance in the titular role while Nick Stahl gives a chilling performance as well. If you like Farrands’ films, then this is worth seeing.