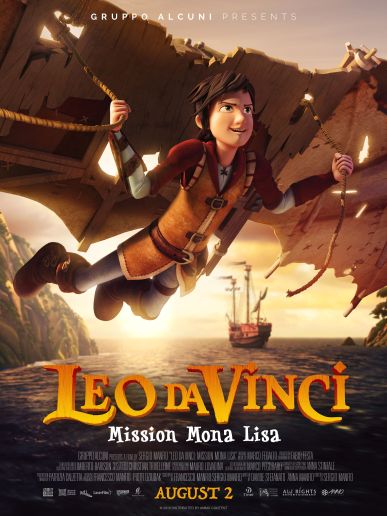 The legendary artist gets his own animated tale where he showcases his talents before becoming the artist he was meant to be in this fun animated adventure.

Leonardo “Leo” Da Vinci is an inventor who is struggling with his newfound things. He has been wanting to create a flying machine which works at times but has its issues. When he introduced friend Lisa to the machine, it couldn’t have come at a worse time. During their adventure, Lisa’s father lost all of his harvest in a fire and cannot afford to pay back the bank to keep his land. Taking the blame for not being there, Leo decides to do what it takes to make up to Lisa.

Leo and Lisa head to Florence, where he is supposed to go become an apprentice to a master artist. However, he learns that the artist is currently out of town. The duo decides to make the most of it, until they learn of a treasure that could be the key to helping Lisa with Leo finding the map and joined by two youngsters, Niccolo and Agnes. However, a pirate has learned of Leo having the map and will do what it takes to get his hands on the treasure.

Bringing a legend in animation form can be tricky. It can be even trickier when it comes to having a young version of that legend to animation form because it soon learns the filmmakers to think what route to go. Should they follow history or make something fun out of it with a fun adventure and bring some fantasy to it. In terms of the filmmakers here, they rely on the latter and this is actually quite a fun family adventure.

The film revolves around a teenage version of Leonardo da Vinci, who at the time is heavily into inventions. Of course, the film theorizes on the fantasy that before his prolific and iconic career as an artist, da Vinci invented flying (although the Wright Brothers are the creators of the first real airplane). Perhaps inspired by the classic Steven Spielberg/Richard Donner collaboration The Goonies, the film has some of the same thematic element, which involves the heroes attempting to find a treasure in order to save someone’s land. Of course, there is plenty of fun and hijinks along the way as we see Leo and Lisa team up with young kids Niccolo and Agnes, the latter two who tend to bring out the best in terms of being smartalecks while it is clear Leo has some sort of romantic feelings towards Lisa, hence his reasoning for helping her.

The film does take some darkness in terms of the pirates who are wanting the treasure for themselves. It seems first as if the mission is from some sort of prophecy. And there are some fun twists as aside from flying, the viewer is led to believe that da Vinci invented scuba gear as we seen him underwater in a full suit in one scene. There is quite a nice twist to the story towards the end and with a voice cast including iconic voice actors such as former Power Ranger Johnny Yong Bosch (as the titular Leo) and Bryce Papenbrook (as Leo’s BFF Lorenzo), the voice acting just makes this more fun to watch.

Leo Da Vinci: Mission Mona Lisa is a fun family adventure that melds the legend with elements of Around the World in 80 Days and The Goonies, with an excellent voice cast who make this an overall fun family film.