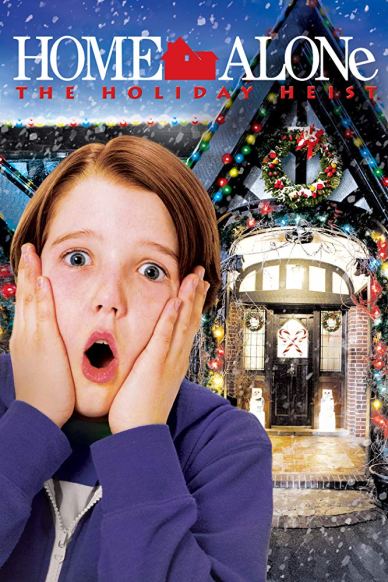 Who would have thought there would be a fifth installment of the Home Alone franchise set eleven years after the last film? How does it rank? Tame, but somewhat not as bad as the previous film.

Just in time for the holidays, the Baxter family is moving from California to Maine. The move doesn’t go well with 13-year old Finn and his 16-year old sister Alexis. The reason for the move is because matriarch Catherine has accepted a new job. The family moves into a big mansion-like home, which is believed to have been the one-time home of a former Depression-era gangster. Thinking the house is haunted, Finn is scared somewhat, but nevertheless only cares about his hobby of video games while Alexis is unhappy with the move and is constantly on her phone.

Sinclair is a mastermind thief who has targeted the house as his next. The reason is because he has learned that there is a rare painting located in the basement. The painting is Edvard Munch’s “The Widow”. He hired longtime partner Jessica, still reeling from her breakup with their last safecracker; and new safecracker Hughes. However, upon learning that the Baxter family has moved into the house, they hatch a plan to break in the house at night. When Finn and Alexis are stuck at home while their parents are at a Christmas party, the trio of robbers decide to put the plan in motion, forcing the siblings to protect the house and themselves.

In this day of age, there have been many unexpected sequels to franchise hits and one could only question why, even though the answer is simple. The issues with most sequels is that while they are obvious money grabs, the end result are just mostly one-watch and you will never want to watch it ever again. While the previous Home Alone film was nothing more than a made-for-TV reboot that could have worked better as a pilot for an attempted TV series version, this new installment takes a more different route in the vein of Home Alone 3.

In this modern day of age, the world of gaming can play a factor in the story of a film and this proves to be true in this case. Our hero Finn, played by Christian Martyn, is an avid gamer who spends most of the first two acts of the film playing his game and chatting with a fellow gamer. When he learns his new gaming buddy is an older man who lives in Chicago (one reference to the original), it may seem creepy but the man in question, Simon, played by Bill Turnbull, becomes a reliable ally to help Finn in his caper against the trio of robbers while his sister Alexis, played by Jodelle Ferland, is stuck in the basement.

The trio of robbers are played by legend Malcolm McDowell, Debi Mazar, and Eddie Steeples. McDowell’s intention is to get the rare painting “The Widow” by Edvard Munch (another original reference as Munch’s “The Scream” would become the iconic pose of Macauley Culkin’s Kevin McCallister). Finn’s gags against the trio are quite fun to watch, especially when it comes to Mazar virtually getting the brunt of the action, turning her into a human Rudolph. One of the funniest gags involving the entire trio is Finn using a slingshot against a stuck Jessica who proceeds to hit the other two after she is hit with the slingshot ammo. The gags here bring a bit of a redemption for the franchise, but it’s safe to say it’s finally time to put a closure to this franchise.

Home Alone: The Holiday Heist is a (hopefully) fitting end to the modern Christmas franchise which brings to mind the modern day gaming era clashing with old school slapstick gags that bring a little sense of redemption to the franchise.