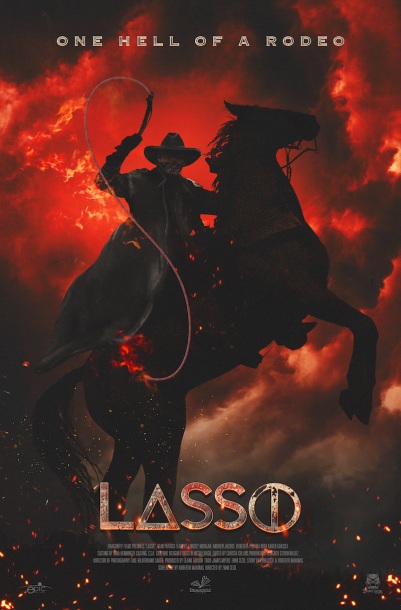 This is one rodeo you wish you never attended as these cowboys become killer in this thrilling horror film.

Siblings Kit and Simon are the leaders of an active senior group going on a field trip to a local rodeo. At first, things turn out fine. That is, until at the show, Ennis, a one-armed horse rider, gets involved in an accident when the horse’s leg is broken. The horse is put down and the rodeo comes to an end. When the group heads on the bus, Simon is left behind to get Lillian’s brush. However, a mysterious woman runs towards the bus asking for help. A mysterious cowboy kills the woman and then the bus driver. Kit leaves Simon behind to escape.

As for Simon, he is knocked out by the mystery cowboy. Awakened in a underground prison, Simon learns that Ennis and fellow rodeo workers Rosheen and Trish have been abducted as well. They learn that the cowboys running the rodeo spend their nights kidnapping and killing unsuspecting victims as they inject themselves with horse steroids and begin their killing spree. As the group attempts to escape, Kit and the seniors are broken down up the road from the rodeo entrance. Who will be left and how can the survivors turn the tables on these killer cowboys?

From the minds of screenwriter Roberto Marinas and director Evan Cecil comes this horror film with something fresh in terms of a killer rodeo. The idea of killer cowboys is quite an interesting concept, especially with certain members of the group having a specialty. In the case of Noose, who makes his lasso like a noose and goes about hanging his victim and Prodder, who unleashes an amped-up cattle prod that will completely electrocute his victim to the effects of perhaps an electric chair. Then comes the mysterious Dark Rider, whose weapon is a bullwhip with a claw at the end, which can tear flesh off his victim with ease.

The cast of the film is comprised of veteran actors, relative newcomers, and well-known stunt performers. Sean Patrick Flanery’s Ennis is perhaps the one who brings a sense of interest as he is introduced in the film as a one-armed rider who finds himself amongst the group who must survive the deadly ordeal. Andrew Jacobs’ Simon is the one who must endure loads in terms of the killer rodeo while Lindsey Morgan’s Kit spends much of the film broken down with the senior group. While many would expect the senior group to pretty much become unsuspecting victims, one senior leads and from her intro you know she’s the feisty one and it is that feistiness that makes her a strong one. That comes in the form of Lillian, who is played by television legend Karen Grassle.

The likes of actors and stunt performers Travis Andre Ross, Tim Lajcik, and Morgan Benoit are among the killer cowboys, who unleash their terror amongst those kidnapped. In one shocking scene, just to give a viewer a taste of the insanity, stunt performer Melissa Tracy is seen as a potential victim whose death scene becomes quite the most cringeworthy of the film, bringing to mind a certain victim in the horror film 2001 Maniacs, but brought to a more realistic effect. There is perhaps even homage to a certain Jason Voorhees attack scene from Friday the 13th Part VII: The New Blood that will make horror film fans cheer with glee.

Lasso brings something fresh to the slasher film with the killer rodeo, with a great ensemble cast of both potential victims and killers. Some of the kill scenes are exciting to watch and offer both something fun and homage. Definitely a horror film for checking out.

The film comes to VOD on November 13th from Dread Central Presents.