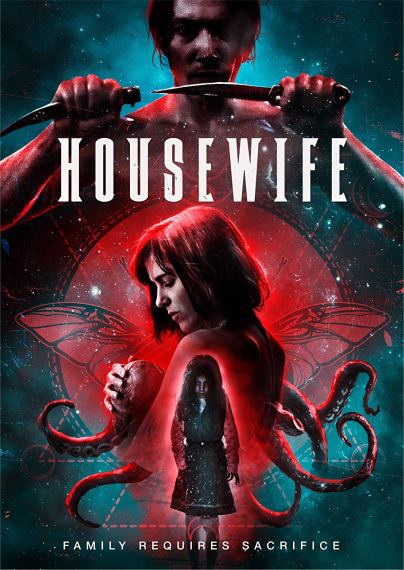 This film around a disturbed young wife who falls under the spell of a charismatic cult leader has one of the most shocking finales in indie films this year.

As a young child, Holly was in complete shock when she saw her mother kill her sister, Hazel, on the day that she had her menstruation cycle for the first time. A stunned Holly attempted to escape but when her father shows up, her mother also killed her father but Holly has escaped. Years has passed, and Holly has still not gotten over the tragic memory of her childhood, but is in a somewhat happy marriage to artist Tim.

When a former friend of the couple, Valerie, returns after two years, it is revealed she is part of an organization called the Universe of Love and Magic. Founded by the charismatic Bruce O’Hara, Molly and Tim reluctantly attend the ULM seminar that night. There, Bruce meets Holly and the two form a spiritual connection, in which Tim begins to grow increasingly jealous. However, Holly learns a shocking discovery about the ULM, her friend, and her memory. Will she find a way out of the chaos or will she find herself enthralled by Bruce, threatening to end her love for Tim?

From Turkish director Can Evrenol comes this very disturbing film that has some fun genuine moments, but more goes on the disturbing level. From its opening sequence of seeing our central character Holly witnessing the purposeful drowning of her sister to her own attempts to escape from her murderous mother to one of the most mindblowing shocking finales, Evrenol has crafted a film that may make horror films jump for joy.

French actress Clémentine Poidatz is great in the lead role of titular “Housewife”, the adult Holly. It is clear that the memory from her childhood still plagues her. While she has some loyalty to her husband Tim, played by Ali Aksöz, she is still disturbed and does things that are usually seen as normal. This all comes perhaps from what she had to endure as a child and feels there is no other way to change her feelings on certain things. Aksöz does quite well in the role of Tim, an aspiring artist whose latest works have a strange aura that will make the viewer have a sense of wondering.

David Sakurai, a name to definitely look out, brings out such an interestingly wonderful performance as ULM founder Bruce O’Hara. Where films involve cults usually involve an over the top performance from its actor playing the leader, Sakurai does the opposite. Instead, he brings charisma to the role of O’Hara, whose intentions are to bring dreams to life, and he means that on a literal level. Sakurai even brings joy to the role in his little dance sequence at the seminar when he is introduced to the audience. Even with the mindblowing disturbing finale, he still brings charisma when necessary when his intentions are known and some of his more insane moments brings shades of Texas Chainsaw Massacre and other horror tropes to mind. One will definitely need a strong stomach to endure the final ten minutes of the film that may bring everything connected but done in such a controversial way that horror film fans may end up cheering for it while others may walk away.

Housewife has some very interesting moments courtesy of David Sakurai’s performance as an anti-type cult leader, but the film’s more disturbing moments will give horror fans a chance to cheer and get excited.