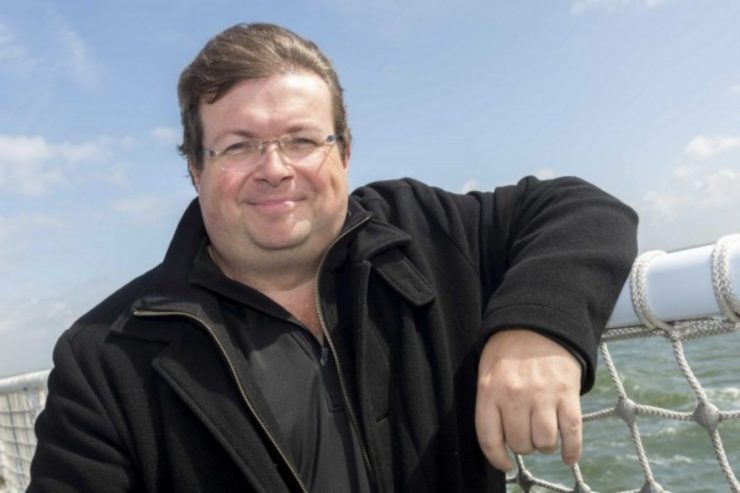 Back in 2016, I had the pleasure of speaking with Dutch director Roel Reiné, who had unleashed what he considered his best film at the time, the historical epic Admiral. While he is known in the United States for his straight-to-DVD sequels including The Marine 2, Hard Target 2, and The Man with the Iron Fists 2, Reiné had always loved the history of his homeland and now on VOD platforms is his latest historical epic, Redbad.

World Film Geek had the chance to talk with Reiné about his latest epic film.

Roel, last time we talked it was about Admiral, and I have to tell you. I think you outdid yourself with Redbad. I couldn’t keep my eyes off the screen and I felt totally engaged in the story.
Cool! Thank you!

What inspired you to bring this legendary story to life?
Well, the story is a part of our history in the Netherlands. I feel that the way is working right now, with lots of diversity and Christians leaving the church, or less Christians believing, people are in an identity crisis. Especially in Europe. It’s like, “Am I a Dutchman? Am I a European? Am I a part of Brexit? Am I part of the European Union?” So, I think all these themes that are happening around the world, it is a good mirror for what happened to Redbad in the 8th Century. He had choices and goals, and hesitations about life.

That was the inspiration. Finding a historical figure and see how in that time, they were struggling with the same kind of themes.

Once again, you did both directing and cinematography on the film. Where did you shoot the film and what difficulties did you face during production?
The difficulty was finding the locations, because like Admiral, we had a very limited budget. So, we were unable to build these sets for the villages. So, what we ended up doing was finding these reenactment historical villages that were built by volunteers and were used for school trips.

I shot the film in Denmark, Germany, Belgium, and Flanders. We drove from little village to little village. The castle was in Belgium and it was this beautiful castle. We also shot a lot of stuff in the north of the Netherlands that had all these beautiful swamps and coast lines that were still there from that era.

I have to say this was a great cast, which included some of my favorite local actors like Reneé Soutendijk and Huub Stapel. Jonathan Banks himself is a major supporting actor in Hollywood. However, the true driving forces of the film were Gijs Naber and Loes Haverkort as Redbad and his wife Frea. What did the cast bring with their experience? (Ed. Note, I wasn’t sure if I was going to pronounce Naber and Haverkort’s first names right, but Reiné did say I pronounced them right so thank you Roel!)
These two are two of the best actors today in the Netherlands and they were so dedicated. They trained for three months to learn horse riding and swordfighting. They have never done that before. They went full force in their training and became so dedicated to play these roles. Especially Gijs. I mean he was so dedicated to do this and so intense. Normally, he’s a very serious actor who does mainly arthouse drama in the Netherlands. So to have him play this more commercially-style character allowed him to have lots of layers and undergo this training to become a swordsman and horseman, it was absolutely a blast!

Working with Jonathan Banks was really cool. I mean, he was really going for it as well. He was learning so much about this period and its history, so he was determined. So that was great. And yeah, I was happy that some of my favorite actors were in this. I’ve always been a fan of Reneé Soutendjik, Huub Stapel, and Jack Wouterse, who plays Willibrord, so I felt very lucky.

The action scenes, something you are noted for in terms of directing, bring a visual style that fits perfectly for this genre of film. How did you manage to have so many extras for these well-filmed battle scenes?
In total, we saw 8,000 different extras on the set. So we had 8,000 different faces on the set. We had a very good core group, it was about 200 fighting extras and 100 were part of this reenactment group that were known for doing swordfighting and do all these demonstrations at festivals. So we had those guys train themselves and they trained another 100 new people. This became the 200 core group that were really well known that could do these sword fights and even designed their own fights. They showed them to me and I incorporated them in the action sequences. That was such an easy way to go.

The other background extras were people from the Netherlands who came for a few days and got involved. I mean managing it was not so easy. For example, a film that had this massive battle in the 60’s I think, it took three weeks to shoot a battle like that. I had two days. It’s very complicated to get the scope that I wanted. Since I was also doing the cinematography, I knew exactly where I wanted the cameras, so it was a combination of really being prepared, having a team who trained themselves, and I took two days on each battle sequence in the film.

Are there any current projects that you can talk about and will you be doing a third historical epic in the future, because both Admiral and Redbad are by far, some of your best work yet?
Thank you so much! Yes, I do want to do a third film about William of Orange, the founder of the Netherlands. But it would also be a big battle-driven film because there was a war between Spain and the people who were living in the Netherlands. And they would liberate themselves from the Spanish and that would become the founding of the Netherlands.

Now, I’m really proud to be working on the new Netflix series, Wu Assassins. I’m actually here on the set with Katheryn Winnick from Vikings and Iko Uwais from The Raid movies. They both are the leads on this series and I shot an incredible fight last night with Iko, who choreographed the fights. And it was so exciting because I’m such a huge fan of The Raid movies and to be working with him and his team, it’s really a blast.

I’ve been looking forward to that series since its announcement so that’s awesome you are working on that.
Yeah!

Redbad is now On Demand and is actually available on Redbox. Anyone who loves historical epics and love series such as Game of Thrones and Vikings will definitely want to be a part of this experience. Roel, thank you again for talking about Redbad and I hope we get to keep in touch.
Definitely and I do have to say before I go, Redbad is now the best film I think I have done. (Laughs)

A Special Thank you goes to Epic Pictures and Roel Reiné for making this interview possible.

1 thought on “The Power of “Redbad”: An Interview with Director/Cinematographer Roel Reiné”