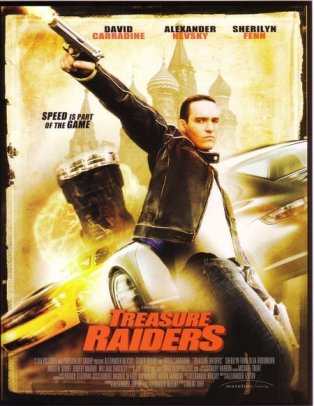 Russian powerhouse Alexander Nevsky meshes The Fast and The Furious and National Treasure with this action packed film.

Wolf is the top street racer is Moscow. Aside from owning a nightclub from his winnings on the streets, he is also the head of a low-key vigilante group who are strictly against drugs. One fateful night, Wolf meets his match in American professor Michael Nazarro, who is a descendant of the Templar Knights who has possession of a book and has learned Wolf has a medallion signifying he may also be a descendant of the Knights.

Michael has been tracking down another Templar book called The Gospel of Jacques de Molay. After a race between the duo for the medallion, Wolf has learned Michael is being targeted by an alliance between the Russian mafia and the Colombian drug cartel. Meanwhile, the Russian police, whose top detective Cronin has ties to Wolf, believe that Wolf may be somehow involved with the drug cartels. Will Michael and Wolf be able to evade everyone involved in order to successfully find the mysterious book?

You have to hand it to Alexander Nevsky, the Russian bodybuilding champion turned actor and filmmaker. Once again, he meshes international action with his native Russian flavor. For this film, he meshes the likes of The Fast and the Furious with National Treasure and joins forces with The Scorpion King villain Steven Brand, who plays an American professor who looks for a treasure of his ancestors, the Templar Knights. The two do quite well together despite their different personalities. Nevsky shows why he is an underrated action hero type with Brand bring his more intellectually equal.

The film also makes good use of 80’s film veteran Sherilyn Fenn as Nevsky’s love interest while Olga Rodianova plays a Russian woman who seems to have a romantic interest in Brand. David Carradine plays a bit of mystery to the film as Pierre, a businessman who looks to hire Brand to find the Gospel of De Molay. Andrew Divoff, usually known for playing villains, goes against type as the detective who seems to have it in for Wolf due to his past connections with him. Perhaps he is worried that Wolf may never change in his eyes, not knowing the work Wolf has done and how he really has changed.

The action scenes, a meshing of car racing action, fistacuffs, and gunfire, is quite enjoyable for this caliber of action film. The car races are a bit reminiscent of the original Fast films while in one fun action scene, Nevsky uses his strength to incapacitate some mobsters who have kidnapped his girlfriend. The finale, where everything is revealed, is quite satisfying even if it seems to be predictable.

Treasure Raiders is a pretty decent action movie that makes good use of Alexander Nevsky and Steven Brand showing natural chemistry as the brawn and the brains of a treasure hunt. David Carradine, Sherilyn Fenn, and Olga Rodianova bring ample support to the film in their roles.