Martin Koolhoven is one of this generation’s celebrated Dutch filmmakers. Since his breakout film, Winter in Wartime, Koolhoven has had major success in his homeland and while he has been offered to do films in Hollywood, he has decided to keep going with his own films. His latest film, Brimstone, starring Dakota Fanning and Guy Pearce, comes to theaters, VOD, and Digital HD on March 10 from Momentum Pictures.

World Film Geek had the chance to speak with Martin about the film and his influences.

First of all, thank you Martin for taking the time out of your schedule to talk about Brimstone.
Yes, my pleasure.

For those who are unfamiliar with your films, can you give us a quick description of how you got involved in filmmaking?
I loved filmmaking as a child. I’ve learned as a child that it’s more than just movies, but the actors who pick up the story as they go along. And for me, it was when I was 11 years old, I saw Once Upon a Time in the West. That’s when you know that you feel something that is truly made and wonderful. So that’s the first thing that really got me into movies on a deeper level.

I come from a very small town in Holland. I was born in a bigger city, but when I was a teenager I was living in a small town. And that was something that was in my vocabulary. I was thinking, well maybe I should make movies. So I was about seventeen or eighteen and in school, they had an audiovisual program so I tried it out using a camera and I thought to myself, this is something I should really start doing professionally.

So I went to school to study audiovisual for about two years and then I applied to the Film Academy in Amsterdam, which is not a very easy school to get into. I wasn’t accepted so I went to another film school in Belgium for about a year. Then, I decided to try again in Amsterdam and this time, I was accepted. In my third year of film school, I was discovered by some local producers. So once I got out of film school, I started to work in television and I feel very lucky because I have been working ever since.

I got to see Brimstone and boy, did I like it. It was very structured in terms of story-telling, had a bit of a Tarentino-vibe to it. How did the idea of the film come about?
Oh good! Actually, the movie I did before that, Winter in Wartime, did very successfully around the world, including the United States on DVD, on Demand, and Digital. And then of course, Hollywood starts calling and I kept saying no because they didn’t send me anything that I liked.

So I met with an English producer and he said, “If you want to do an English movie, what is it that you would like to do? “So I said, I wanted to do a Western. Because at that time, the Western was practically dead until Quentin Tarentino made Django Unchained. So the producer said, “Why don’t you do it?” I said, “Why don’t I do it actually?” And I always loved Westerns, but was never sure if I could do one, but I figured I am successful now, why not take a chance and make a Western and get it financed?

So that’s how that came about so I was thinking that this is a genre I love and was very intimidated by it, so I have to make it personal. And if I am going to have a film set in America, I have to put in a foot from my own culture. Since I come from Holland, I felt it was necessary to have a Dutch reverend, who follows the most typical Dutch belief of mystic thoughts and beliefs, and that’s the idea where that came from.

And I really wanted to do something that had a female perspective, something that you never really seen in the Westerns. If there was a woman playing a lead, there would still have to be an outlaw. And that’s funny you mentioned the structure of the film, because that was something I wasn’t intending to do from the start.

When I was writing it, it started out as a linear story with lots of flashbacks. About a year after I began it, I realized that the past is actually part of the story. So I had to create a new structure that would allow me to bring the past into the story as well. And lots of people would ask me if I was influenced by Tarentino or Christopher Nolan’s Memento or other great movies and I just thought well, this is just the story and I had to bring the most emotional way to tell the story.

I just came up with the story and I did realize that yes, I did see Citizen Kane. I did see Pulp Fiction, Memento, all these films that are non-linear. And the fact I came up with the story in a flash and realized that there was possibilities and just not seen that. I cannot say I was not influenced by them, but I didn’t think that I was going to do something like that. It came clearly from the context of the movie. 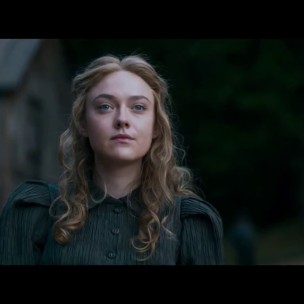 What was it like working with the cast? Dakota Fanning I felt gave it her all and Guy Pearce’s Reverend was purely evil and gave it his all as well.
I thought they were fantastic, both of them. I’ve been a fan of Guy’s for a long time. The first time I saw him was in Priscilla, Queen of the Desert. And I thought he was amazing in it and I didn’t even know he was in an Australian television series. But then I saw L.A. Confidential pretty soon after that and I was like, “This is the same guy?” And I thought, this guy is amazing. He’s versatile, so I’ve been following him since and I notice how he physically transforms himself to fit the part. And for this film, he learned the Dutch dialect, so he’s a fantastic actor.

And this was something he wanted to do. He was crazy enough to get into the dark things. And he could just be doing Iron Man 3 or those kind of things, but he wants to do challenging stuff. And I applaud him for that.

And Dakota. She plays a mute in the film, so I was looking for someone who can convey emotions without having any dialogue. And it was a complete blast. I never knew someone so knowledgeable about what I’m doing. She was 21 when we were shooting but she has been doing this since she was six.

Dakota’s truly a natural and can make any role work.
Oh my God, it was so great because it is in her DNA. I never met anyone who was so easy to direct because I would walk up to her and she would say, “Yes, I understand”, and I didn’t even say anything. She completely understands what she must do without having to get technical. It is like she has an extra eye out there and she is so knowledgeable that I think she could eventually make a good director herself. She’s amazing!

The bottom line is that in my opinion, this is definitely a Western epic film. Would you consider this your favorite film that you’ve made or do you have another one of your films that you enjoy more?
I’ve liked the films I made before, but this is definitely a personal film for me. I think it is more challenging in terms of what I can do and even to have a strong female character and invoke religious fanaticism, which is something I think is very important today and that’s quite a very dangerous meshing, but it is something I can say I am proud to talk about through this film.

Finally, do you have any new projects in the works?
I am at the moment, working on the early stages of a new film and am in development, outlining the story, characters, and all. What I like to do is take what I did with the Western genre and come up with something fresh. I know that is ambitious and pretentious, but it is something I would like to do.

Brimstone comes out in theaters, VOD, and Digital HD on March 10. I hope everyone gets to enjoy the film as much as I did. Thank you again Martin for taking the time to talk about the film.
Thank you so much.

A special Thank You goes to Katrina Wan PR and Martin Koolhoven for making this interview possible.