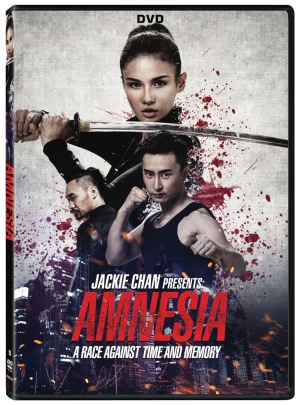 Jackie Chan executive produced this loose reboot to his 1998 film Who Am I with the chance for newcomer Ocean Wang take the lead.

Li Ziwei is a former race car driver who after reeling from the death of his girlfriend, has become a bike messenger. When he is hired to pick up a package from Zhang Qiming, he is met by two mysterious people, Jiao and Long. The two have actually killed Zhang and expect the package Li has picked up. However, when Li sees Zhang’s body, he narrowly escapes the duo until they chase him down to the point where Jiao hits Li on a bridge, causing him to hit his head before dropping off in the river.

Li awakens to learn he has no memory when it comes to face recognition. He soon finds himself framed for Zhang’s murder but still has his hands on the package. Li meets hitchhiker Tong Xin, who at first, is arrogant and threatens Li. However, she soon learns Li is a target and decides to help him. Li soon learns that the mastermind is Biao, a hired gun for Wei Tang, who is looking to take over his late brother’s company by having the real heir to the company, his niece who has leukemia, being unable to find a donor. With all the cards played, Li finally must find a way to find the donor as well as clear his name before it is too late.

In 1998, Jackie Chan’s Who Am I, considered to be one of his last greatest action epics, had him play the titular character, an amnesiac who just longs to find his identity and finds something important that his accident was part of. He would serve solely as the executive producer for this loose reboot, originally titled Who Am I 2015, with a pretty decent newcomer in the form of Ocean Wang in the lead role.

The difference between Chan’s Who Am I and Wang’s Li Ziwei is that Chan seems to have no recollection of who he actually is. As for Wang, he only suffers from having the inability to recognize faces, even for a short period of time. Wang is able to prove himself as a decent lead for this kind of film and Chan would even bring in two of his female co-stars of Chinese Zodiac to help enhance both the comic portions and the action portions.

Yao Xingtong helps with the comic relief portion of the film as Li’s mistrusting partner Tong Xin, a sassy type who helps and somewhat falls for our hero while taekwondo champion turned actress Zhang Lanxin plays one of two menacing goons hired to kill Li at all costs. Interestingly enough, the other goon is actually played by the film’s co-writer, co-producer, and director, Song Yinxi. Both Zhang and Song have a bit of comical farce when it comes to their scenes with Ken Low, who plays central villain Biao sporting a Yuri Boyka-style mohawk and dresses much like his character from Fatal Contact.

The action is somewhat minimal when compared to Jackie Chan films, but JC Stunt Team member Han Guan-Hua crafted some decent kickboxing style sequences in the vein of his mentor when necessary. There are some obvious CGI and stunts for certain stunt sequences, and don’t expect much from Yu Rongguang, who has more of an extended cameo as a pivotal character involved in the entire story.

Amnesia is not a complete disaster, but it’s nothing compared to Chan’s original Who Am I. However, Ocean Wang has that potential to be a bankable lead and with her track record in some of Jackie Chan’s recent films, perhaps Chan may be ready to launch Zhang Lanxin as a potential lead eventually. This film is more for curious parties but don’t expect the fireworks.