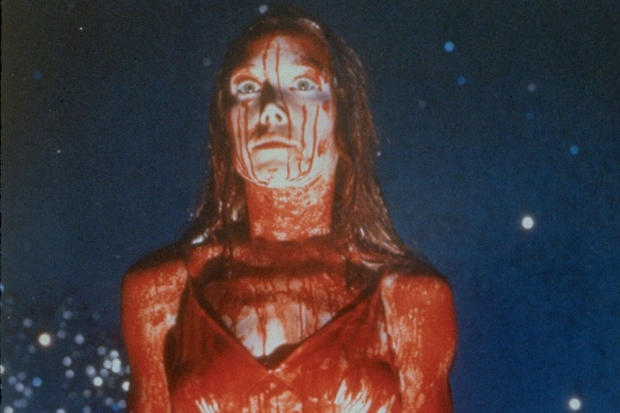 Stephen King’s first novel was given a film adaptation in 1976, one that would be considered a horror film classic. However, the latest film adaptation proves to be a worthy remake that proves more faithful to the original novel but with modern twists added. Here, we will look at both films and show why both Sissy Spacek and Chloe Grace Moretz definitely show some of their best performances as the girl with the telekinetic powers.

In 1976, director Brian DePalma was the first one to tackle King’s novel with the casting of Sissy Spacek as Carrie White. The film starts out at a volleyball game and the very shy and outcasted Carrie faces ridicule from a lot of the more popular girls. When Carrie discovers her first menstruation cycle, she mistakes it as her “bleeding to death”. Some of the girls react by throwing tampons and pads towards the young girl only to be saved by gym teacher Miss Collins.

Carrie has been raised by her mother Margaret, a religious fanatic type who sees virtually everything as the Devil’s work. When she learns of Carrie’s first “period”, she forces the girl into a room to pray. Soon enough, Carrie begins to slowly realize she has some sort of power.

Meanwhile, back at school, lead bully Chris Hargensen refuses to take detention and is banned from the prom. She hatches a plan with the help of her boyfriend Billy Nolan to get even with Carrie. However, one of the other girls, Sue Snell, feels regret for her actions and decides she wants to befriend Carrie. She asks her boyfriend, Tommy Ross, to ask Carrie to the prom as a way to make amends. At first rejecting Tommy for fear of being tricked again, ultimately accepts.

When Margaret refuses to let Carrie go to the prom, she reveals her powers to her mom and tells her to not move or say anything until she leaves. When Carrie goes to the prom, she finally feels acceptance with some of the students. However, Chris and Billy have their plan set in motion. With the help of fellow bully Norma, Tommy and Carrie win Prom King and Queen. However, what they soon learn is that Chris has taken a bucket of pig blood to be doused all over Carrie. When Sue arrives to see how things are going, she sees the bucket, Chris, and Billy, but is barred by Miss Collins, who fears Sue is planning another trick. When it is too late, Carrie is doused with the pig blood and the bucket falls, knocking Tommy unconscious. Anyone who sees or knows this film or has read the novel can guess what’s about to happen next.

Flash forward thirty-seven years later. Many feel that a remake to what is already hailed as a classic horror film is unnecessary. Most likely, those who have seen the original film may not realize that with the exception of the film being set today and thus, using modern technology, this version, directed by Kimberly Peirce, proves to be more faithful to the original source material of Stephen King’s novel.

Instead of volleyball, the film begins with a water polo match but not before we see Margaret White giving birth years earlier to Carrie. The film sets up the same way, with Carrie getting her first menstruation cycle and being ridiculed. However, this time around, bully Chris Hargensen uses her cell phone to videotape the ridicule of Carrie. The teacher, Ms. Desjardins, calms Carrie down.

This time around, Chris attempts to get out of detention through her father. However, when it is revealed that Chris had uploaded the video of Carrie’s ridicule on Youtube, she refuses to show the evidence and is barred from the prom. She conspires with boyfriend Billy Nolan to get the bucket full of pig’s blood while Sue Snell asks her boyfriend Tommy Ross to ask Carrie to the prom to make amends. Everyone knows what happens next.

Carrie White is definitely well played by both Sissy Spacek and Chloë Grace Moretz in these two films. Spacek definitely was hellbent on getting the role at the urging of her husband Jack Fisk (who served as an art director on the film) and proved herself to make the role a groundbreaking one for her. As for Moretz, she is definitely making a name of herself in horror adaptations and remakes. She played a werewolf in Tim Burton’s version of the TV series Dark Shadows and as a vampire in the American remake of the Swedish film Let the Right One In, titled Let Me In. She clearly outdoes herself in the role of Carrie, showcasing one of her best performances yet.

Piper Laurie truly makes a welcome return in her first role in fifteen years as the religious fanatic Margaret White while in the new version; Julianne Moore brings out one of her best performances. It is clear that this is one crazy mother who thinks everything has to do with sin; perhaps she was an influence on the character of Kathy Bates’ Cajun mama Mrs. Boucher in the comedy The Waterboy. Both Amy Irving and Gabrielle Wilde do well with their versions of Sue Snell, with Wilde’s version revealing a twist. William Katt and Ansel Engort play it straight as the nice guy Tommy Ross, who like girlfriend Sue, wants to help Carrie feel accepted. Nancy Allen and Portia Doubleday play bully Chris Hargenson so well that one can’t wait to see their demise.

What about the special effects? Well, while the original used a more conventional style of special effects, courtesy of Gregory Auer, the new version combines conventional with CGI. Sometimes the CGI in the new gets overdone, but a nice touch to the madness involves the use of slow motion impact. This truly is a plus with the fact that Carrie is a telekinetic young woman who can be best described as one type: she is definitely the ultimate in nerds seeking revenge.  The major difference is the infamous prom scene. While the new version proves to be more faithful to the King novel when it comes to this scene, DePalma’s version brings a more “no-holds barred” style of vengeance and it clearly shows.

The “prom” scene would be spoofed in the 1982 comedy Zapped! where Scott Baio’s telekinectic Barney wreaks havoc at the prom but done with more teen comic flavor, but it’s clear that the scene was an homage to the classic horror film.

Both versions of Carrie are truly really good films with Sissy Spacek and Chloë Grace Moretz in their some of their best performances yet as the girl with the telekinetic powers. If one wants a more faithful version of the original novel with a modern day twist, it is better to see the Peirce version yet DePalma’s version keeps the core elements and is driven by Spacek and Piper Laurie, hailing it as a classic horror film.