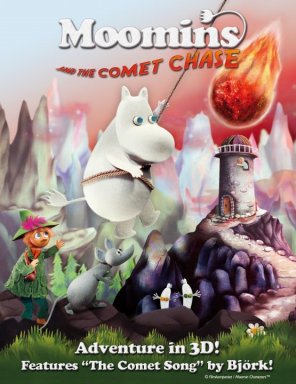 A beloved children’s series from Poland gets an arc re-edited into a feature length film originally seen in Sweden and Finland. Five years later, the film gets a U.S. release with an ensemble cast led by some top Scandinavian actors who are quite well known in the States.

One day in the Moomin Valley, Moomintroll notices that everything has been covered in grey dust, including the rivers, trees, and even his own house. When Moomintroll meets the intellectual Muskrat to find out what had happened, Muskrat tells Moomintroll that something from the sky could be the cause of what has happened. Determined to find out, Moomintroll takes his parents’ advice and heads towards the nearby observatory. Going along for the trip are Moomintroll’s friends Sniff and Snufkin.

While it was no easy journey, the trio reaches the observatory and learns that a comet is set to hit the Earth in four days, four minutes, and forty-four seconds. Knowing they must had back and warn everyone about the comet, the trio head back but find it will not be as easy as they face constant danger and obstacles. On the flip side, they make two new friends who will help them on their journey home: Snork and Snorkmaiden. Will Moomintroll and his friends be able to get home before the comet hits the Earth?

Based on the children’s series of books by Tove Jansson, this feature length film is made from episodes of The Moomins, a Polish stop-animated series that ran from 1977 to 1982. With the help of a Japanese company, the animation has been converted to a 3D effect that works quite well. Taking an arc of a series and combining it into a feature film can be a risky move. If the editing isn’t done correctly, it can leave loads of plot holes. However, thanks to the editing of director Maria Lindberg, the story is smoothly edited into a 75-minute children’s adventure.

The English-language cast is great here, in this case, the likes of a mainly Scandinavian cast who are well-known in the States. The legendary Max von Sydow is the narrator of the story while True Blood and Legend of Tarzan star Alexander Skarsgård shows he can provide a youthful voice in the lead role of Moomintroll. Alexander’s father, Thor and Avengers co-star Stellan Skarsgård is Moominpapa, who advises his son to check out the observatory. In some very funny performances, Mads Mikkelsen and Peter Stormare provide the voices of Moomintroll’s two comedic sidekicks Sniff and Snufkin respectively. Knowing Mikkelsen’s role as Hannibal in the TV series and Stormare’s typecasting to play some sort of villain in Hollywood films, it is welcome to see these two just having fun with their roles and doing something off the grid.

The film also has quite an interesting theme song from Icelandic musician and sometimes actress Björk, who admits she had been a huge fan of the Jansson books. The opening credits sequence, done by Antonio Ringbom, plays out like a music video as the animation fits perfectly to “The Comet Song”, the song performed by Björk and written by another fan of the franchise, the Icelander Sjón.

Moomins and the Comet Chase is a fun film for people of all ages. It is well edited arc from a popular series, has a great voice cast, notably Alexander Skarsgård, Mads Mikkelsen, and Peter Stormare, who go against type and sound like they are having fun as the trio of adventurers, and is all out fun in terms of its classic stop-motion animation. Definitely a family film worth seeing.