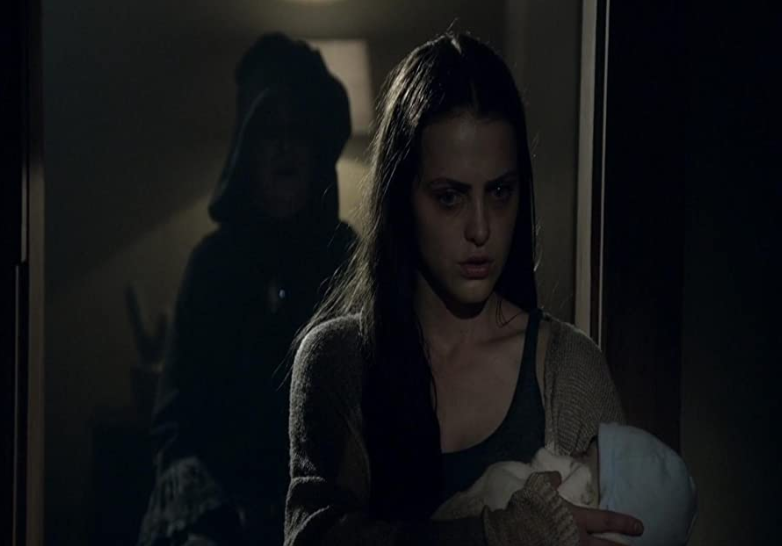 A young mother has her world turned upside down in the most sinister of ways in this haunting South African horror tale.

Returning to her hometown, nineteen-year old Chloe van Heerden has become a first-time mother to a baby boy she named Liam. However, she dreads being home as she has had an estranged relationship with her mother, Ruby. From the beginning upon her return, Chloe begins to feel something is wrong but can’t explain it. She does know that it involves both her return home and her son Liam.

As Ruby notices Chloe doing thing a mother should not be doing to her son, she berates her on a consistency. Chloe slowly begins to become affected by the yelling. Ruby goes to see the local psychiatrist, Dr. Reed.  Dr. Reed suggests he sees Chloe in an attempt to help her. When Chloe begins to see Dr. Reed, she starts to feel better and even reunites with her former boyfriend Adam. However, Chloe soon discovers that she and Liam are being victimized by a strange and mysterious force known to take babies from the innocent. Will Chloe find a way to stop the entity or will it be too late?

From the director of Sarafina and To the Death comes this very haunting film that brings to mind recent fare like Mama with a dash of The Shining. The story of a 19-year old single mother haunted by a sinister ghost as well as other factors is well done with its scares and twists. It seems like there is ultimately no redemption for any of the core characters in the film as they all show one form of being sinister with possibly zero chance of getting better.

The highlight of the film is a nearly unrecognizable Reine Swart, who is just amazing to watch as Chloe. From the moment she gives birth, you know something is not right. She barely cracks a smile and seems more seen as someone who has failed not only her mother but herself as well. However, that’s not to blame as it is revealed in flashbacks, she is in a virtually very abusive relationship with her mother Ruby, played by Thandi Puren. A young mother herself, Ruby berates Chloe when she asks about her father. It is clear from their first scene together that this is a volatile relationship that’s just waiting to once again explode like in the flashback scene.

What’s really shocking, well, not so shocking to be honest is the character of Dr. Reed, played by Brandon Auret. From the moment we meet him as he is consulting with Ruby, you can tell he has this bit of a crush on the young “grandmother”. However, it is when he talks with Chloe that at first seems okay. However, we soon learn about the entity through Dr. Reed and it is when he advises Chloe to not fight it, but let it consume what it wants that shows this sinister side to the doc. Then, finally there’s Adam, Chloe’s former boyfriend, played by Deanre Reiners, who for the most part is a nice guy. Of course, in a pivotal moment in the film, he soon makes his intentions clear thus making his as sinister as the others and it is this moment when the film goes on a Shining-like feel.

The Lullaby displays evil from the beginning to the end, whether it is in the form of the supernatural entity to the descent of the lead into madness and the supporting characters’ sinister motives and actions. A gem for fans of supernatural films.