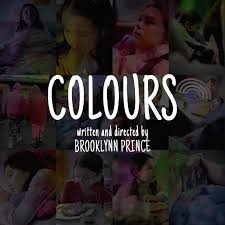 The Florida Project breakout star Brooklynn Prince makes her directorial debut with this short film about facing fear and the power of friendship.

Natalie and Sarah are lifelong friends who envision their world full of rainbows and unicorns. However, when Sarah suddenly falls ill and ends up in the hospital, Natalie fears the worst. Eventually, with the support of her family, Natalie decides to face her fear and pays Sarah a visit at the hospital. She just has to get a few things first, and then there’s the nurse who informs the family visiting hours are over.

It is hard to believe that a nine-year-old could direct a short film of this magnitude, but Brooklynn Prince did it and what a fine job she did. This twelve-minute short film about facing fears and the power of friendship is a emotional and heartwarming tale of two best friends who reunite via a visit to the hospital when one falls ill. With help from her mentor, The Florida Project writer-director Sean Baker, who produced and wrote the script, Prince does an extraordinary job.

One the funniest scenes actually involves the hospital visit, where Natalie’s parents decide they are gonna let their little girl see her friend come hell or high water. How? By stalling the nurse to a tee while Natalie (played by Prince) and her brother Alex (played by Kiefer O’Reilly) head to see Sarah (played by Fleur Delahunty). It’s a very heartwarming scene that adds quite a bit of a twist, but a very good-natured one at that.

Colours is a very well-made short film and a future filmmaker on the rise in nine-year-old star Brooklynn Prince. This film could be a stepping stone to a fruitful career behind the scenes as she already has it down in front of the lens.