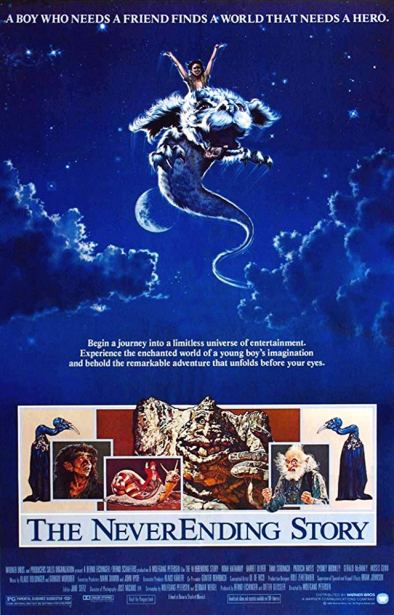 This 80’s film gem is one of the greatest fantasies to hit the screen, the first of an unexpected trilogy.

Bastian Balthazar Bux is a shy awkward kid whose mother has passed away and his father is a workaholic. Bastian constantly daydreams, and he is also the target of a trio of bullies. When he escapes from their clutches one day, he finds himself in the bookstore of Mr. Koreander, who is convinced that kids are not into books anymore. As Bastian looks around, he finds a book called The Neverending Story. Despite Mr. Koreander’s warning about the book, Bastian takes the book and heads to the attic of the school to begin reading.

The story involves the magical land of Fantasia, which is under attack from a force known as the Nothing. A young warrior named Atreyu is tasked with finding a way to stop the Nothing and find the Childlike Empress. As Bastian continues to read the book, he slowly begins to discover something extremely shocking. As he reads on, Bastian discovers that he, and not Atreyu, is the one who may be the key to saving Fantasia. But how will be the one to do it?

This is one of the greatest fantasy films of the 1980s based on a book by Michael Ende, who publicly denounced the film and even went as far as attempted to sue the producers and lost. Nevertheless, Wolfgang Petersen directed a wonderful film about a boy and his unexpected journey in the titular book as he is engaged not only in the story but is shocked to learn he is part of the story. Along with the beautiful sets on location in Germany, what helps drive the film is the cast.

Barret Oliver is excellent as the shy awkward Bastian, who dreams and finds himself immersed in books as an escape from the reality that surrounds him. While there is bullying, in which they throw him into the trash bin, you can’t help but cheer with his retaliation against the bullies because in some ways, it’s unexpected but so much fun. And this is great because we see Bastian really getting into the story and his shocking reaction and fear when he discovers he may be the one to save Fantasia.

Noah Hathaway is the fictional hero of the book, the young warrior Atreyu. A brave soul, of course the fact he is a young boy shocks the ones who seek him. However, like Bastian overcomes certain obstacles in the real world against the likes of bullies and his being an outcast, Atreyu must overcome a series of quests in order to save Fantasia including facing a wolf-like creature, the Gmork, and stop the Nothing. Making her film debut as the Childlike Empress in the final act is young Tami Stronach who gives Atreyu and Bastian the biggest reality checks of their lives and it changes the dynamic to where we will be eventually treated to not one, but two sequels over the next decade.

The NeverEnding Story is a very beautifully shot, at times sad, but amazingly first epic film about a boy and his crossing the line between reality and fantasy, even if he doesn’t realize it. This is a must-see film of the 80s.