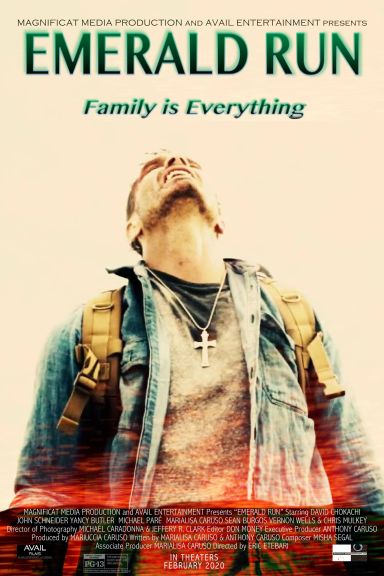 What starts out as a routine job turns out to be a journey of self-discovery in this exciting faith-based heist film from indie filmmaker Eric Etebari.

John Thomas is a man who does not care about church but goes out of respect for his wife Anna. Ten years ago, John’s best friend Martin disappeared in the desert and it is believed that he may be dead. John and Anna’s daughter Lisa is suffering from a health condition and fears she may not live long. When John and Anna are at a crossroads in terms of what to do about Lisa, John is given an offer to do a job for his father-in-law Vito.

Faced with no other choice and with Lisa’s life possibly at stake, John takes Vito’s offer. He is to go across the border and find raw emeralds for a client. Upon his arrival, John meets Emilio, who offers to help him find the gems. After successfully finding them, Emilio and John come across a duo of men, who are revealed to have been hired to kill both Emilio and John. However, as he struggles with survival, John slowly begins to find the faith within himself and intends to not only survive but learns of some shocking revelations along the way.

Indie filmmaker Eric Etebari and writer/producer Anthony Caruso crafted this meshing of desert heist film and faith-based drama about one man’s job which soon becomes a journey for self-discovery and redemption. The other notoriety of this film is the ensemble cast, made up of Hollywood veterans, including the reunion of the stars of the TV-movie and series adaptation of the comic book Witchblade.

David Chokachi is great as the embittered John, who attempts to do what looks to be a simple job in order to help his afflicted daughter. He is seen not paying attention in church and somewhat still reeling from the loss of his friend Martin, seen in flashbacks as played by The Dukes of Hazzard’s John Schneider. Playing his wife, Anna, is Yancy Butler, who played the titular Witchblade with Chokachi. Here, she brings her tough A-game as Anna, who feels like John isn’t doing enough to keep his faith especially when it comes to their daughter Lisa, played by co-writer Marialisa Caruso, who is this film’s young breakout star as a girl who doesn’t know how to deal with her health scares.

Chris Mulkey makes the most of his time as Vito, the charismatic restauranteur who hires John for the assignment and just happens to be his father-in-law too. Michael Paré once again brings his classic tough guy persona in Vito’s bodyguard Matteo, who offers some advice to John before the mission. Steven Williams of 21 Jump Street fame plays a pastor who comes to John’s vision when our hero is at his worse. Finally, there is Vernon Wells, who plays a mysterious figure who helps John restore his faith as well as offer him some pivotal advice that proves to be vital as it pertains to the job he as given.

Emerald Run is more than just an average heist film. It is a film about one man’s simple job that becomes a journey of self-discovery and faith all driven by an excellent ensemble cast of veterans.

The film will be released in select theaters nationwide on February 21.