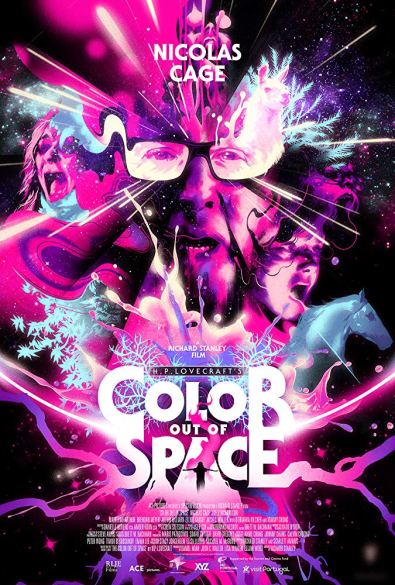 Nicolas Cage goes from 0 to 100 the only way he does in this adaptation of the story by H.P. Lovecraft.

Nathan Gardner is a rural man who lives on a farm with his family, consisting of wife Theresa, daughter Lavinia, and sons Benny and Jack. Ward Phillips is a young man who has been hired by the town to collect water samples on occasion to make sure the water is safe. Nathan has been taking care of the farm while Theresa works as a stockbroker from the barn. Lavinia loves to find herself in a fantasy wold while Benny is going through typical teen issues. However, it is nothing compared to what is in store for the family.

One night, the family is startled by both a flashing purple light and a crashing meteorite that has landed in his front yard. Notifying both the local sheriff and the mayor, Nathan is unsure what to think. Eventually he ignores it and goes about his life. While he and his wife go on a long-needed date night, strange occurrences begin to occur. A creature breaks out of the meteorite and it entices Jack and while Benny feeds Nathan’s alpacas, they look unfed when Nathan returns. However, things begin to get worse for Lavinia and eventually Theresa. Nathan’s mind begins to go crazy. Ward discovers something has contaminated the water and attempts to warn the family. Can they find a way to escape from the insanity that has plagued their farm?

After a six-year hiatus as a director, sci-fi legend Richard Stanley, fresh off his script Replace, returns behind the camera for this adaptation of the H.P. Lovecraft story and co-wrote the film with Scarlett Amaris. The story, which also was an influence for films like the 1987 horror film The Curse and the classic Die! Monster! Die!, was originally written in 1927 by Lovecraft and revolves around a meteorite crash landing on a farm and turning the landowner to a very unhinged man with something worse in store. Stanley and Amaris’ script transplants to the 21st century and does quite well with its production value.

The film sounds like a perfect vehicle for Nicolas Cage, who worked with the film’s production company on 2018’s amazing grindhouse film Mandy. And that it is. As Nathan Gardner, we see Cage go from the calm family man who is willing to go through anything to make his family happy to the unhinged over-the-top Cage fans to either love or loathe. His unhinged nature isn’t on the level of a Wicker Man scene but is more of a Mandy or Score to Settle level of unhinged. Even his singing in the car on the way home from a date night seems a bit cringey in a funny sort of way. However, it becomes crazier once some major twists involving the meteorite’s impact takes a turn for the worse.

The supporting cast does well in the film. Joely Richardson plays wife Theresa as a hard-working woman who like Cage, goes from calm to unhinged but with very dire consequences. Madeleine Arthur’s Lavinia proves to be the most interesting character as she is introduced in the film doing a scene reminiscent of Jennifer Connelly’s opening scene in Labyrinth. It is clear Lavinia is heavily into fantasy role playing, acting like a princess from a medieval like-world. Brendan Meyer makes the most of his role as son Benny, who attempts to bring everyone together in all the chaos that occurs while Elliot Knight’s Ward is the young man whose attempt to warn the family to stay away from the water proves futile. Q’orianka Kilcher plays the mayor who is there to pretty much not care about much and thinks it is just a waste of time while Tommy Chong plays Ezra, a hippie whose scene proves to be more vital to the film as a whole.

Color Out of Space is a worthy adaptation of the Lovecraft story that makes the most of its cast, notably Nicolas Cage and Madeleine Arthur with Cage once again going from zero to a hundred while this could be a breakout role for Arthur.