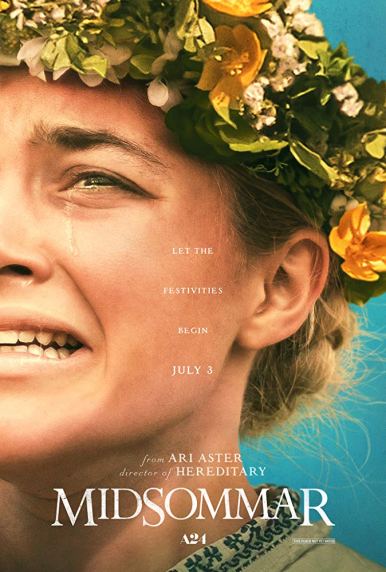 What was supposed to be a vacation and research for a group of college students becomes a horrifying nightmare in Ari Aster’s latest film.

Dani is a young woman who has been through a lot. She has had a turbulent relationship with boyfriend Christian, a college student who is in the midst of working on his thesis. Dani’s world turns upside down when she finds out that her mentally unhinged sister has killed both herself and her parents. Still reeling from the loss, Christian decides to invite her to join him and a group of friends on a trip to Sweden to see the Midsummer Festival in a small town where their friend Pelle is originally from.

The group, consisting of Dani, Christian, Pelle, Mark, and Josh arrive in Hälsingland and meet Pelle’s ancestral commune, the Hårga. They are joined by British couple Simon and Connie, who were invited by Pelle’s brother Ingemar. At first, things start off quite well. However, the group find themselves witnessing suicides and experiencing other mind-altering changes within the commune. One by one, the group finds themselves mysterious losing one another and the bonds between everyone slowly unraveling. Will they find a way to somehow make it out or will this be a nightmare the group will forever face?

Ari Aster became one of the new auteurs of horror when he unleashed his feature film debut Hereditary in 2018. His work on the film was praised among the fanbase as a whole and perhaps, it was the success of that film that made Aster wonder, how and can he top the terror of that film.  Well, safe to say, he really amps up the horror elements with his latest film, set in Sweden’s Midsummer Festival and meshing it with a pagan cult. The film is a success is because the film is more than just a horror film. It’s a look at relationships and the effects of those horrors that everyone experiences and its impact on said relationships.

2019 has become the year for actress Florence Pugh. From her amazing performance as real-life wrestler Saraya-Jade “Paige” Bevis in Fighting with My Family, she makes an even bigger impact in this film as the very traumatized Dani. Now, this is a character who is really going through so much. She is perhaps the most conflicted protagonist in a film of this element. There have been protagonists in horror films who have gone through some sort of abuse, but to learn in the film’s opening minutes that both her sister and parents were killed really takes the cake.

Jack Reynor does a really good job as Christian, Dani’s boyfriend who also finds himself conflicted because he seems to be growing tired of holding her hand. However, the reason why he reluctantly invites Dani is to perhaps help her not think about her pain and sees she is crying for help in a way. Will Poulter is known for playing some arrogant characters such as Gally in The Maze Runner franchise and here, he’s very arrogant as Mark, who thinks Christian should just leave Dani at first opportunity. William Jackson Harper, as Josh, is intrigued by the midsummer rituals and is there not just for vacation, but for his thesis.

As mentioned, Aster really delves into the horror elements of the film. From an elderly couple jumping off a cliff as part of the rituals to a major reference to The Texas Chainsaw Massacre, the film really is for anyone with a very strong stomach and strong heart, especially if you watched the nearly 3-hour director’s cut. There is even a very disturbing scene involving a ritual that leads into one of the most shocking finales in horror films today.

Midsommar takes the cake as one of the greatest horror films today because it’s more than a simple horror film. It’s about the elements impacting relationships, all driven by Aster’s direction and Florence Pugh’s amazing and very emotional performance.