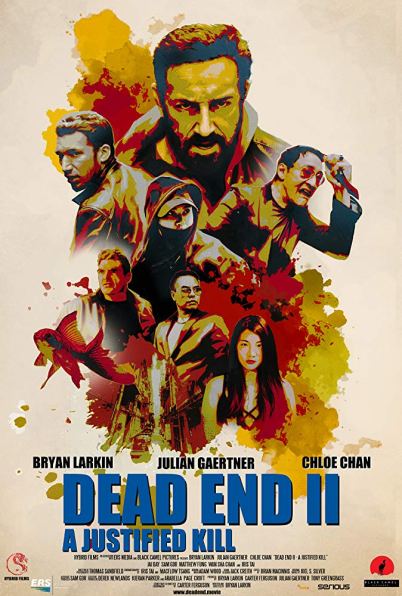 The Contractor and the Young Gun are back and this time, the action is amped up in this excellent sequel to the 2017 short film.

Two elite hitmen, the Contractor and the Young Gun, have received their latest mission in Hong Kong. The mission is to bust a human trafficking ring led by an evil crime boss, Cheung. As the duo finds themselves tracking down and eventually Cheung, they begin to wage war in the streets. Amid the chaos, a young girl finds herself embroiled in the war with the potential of being involved or possibly killed if she is not careful.

The first Dead End had the look and feel of a Hong Kong action-drama that emphasized more on its emotional content rather than its action. And that’s okay because it seems like it would be a set-up for something grander. In this case, it is totally right as this sequel has a well thought out plot, narrative, and some exciting action all wrapped up in a nice 25-minute package.

Bryan Larkin and Julian Gaertner once again play the two central characters, respectively as The Contractor and the Young Gun. This time, instead of questioning their mission, they find themselves with a common purpose and prove themselves to be an elite duo hellbent on stopping a human trafficking ring. From the moment we see these two, the action soon begins. There are plenty of fisticuffs with Larking bringing a rugged toughman style to his fights with Gaertner, a martial artist, engaging in a knife fight with some kicks thrown in against lead villain Cheung, played by Sam Gor.

The big surprise comes in young Chloe Chan, who plays a young girl who finds herself somewhat a witness to the war waging on the streets. A very quiet figure, some flashbacks reveal who she is and her reasoning for watching the events that transpired. While her character may have a sense of predictability, it is still met with Chan churning out quite a performance.

Dead End II: A Justified Kill is an excellent amped-up sequel to the drama-driven original. The story is well played out with Larkin’s direction and once again, the feel of a Hong Kong action-drama delves quite well here.