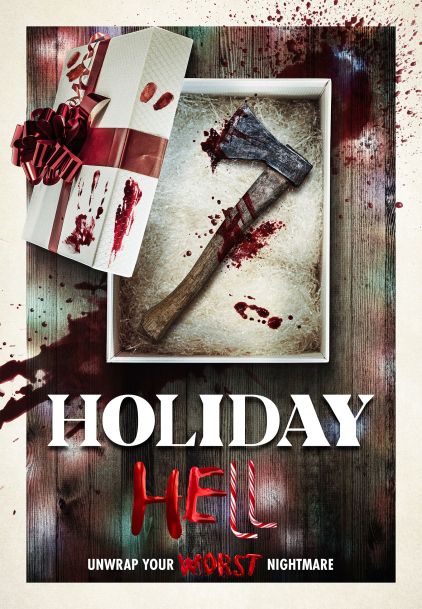 Tis’ the season to bring fear again with this latest holiday horror anthology with the legendary Jeffrey Combs as your host.

A woman named Amelia enters a mysterious shop on Christmas Eve. The shopkeeper is about to close up but is intrigued when the woman offers him money for a gift to give her sister for Christmas. At first, the shopkeeper seems reluctant as it is close to Christmas. However, he gives her a chance to look around and even tells her that each item in the store has a story that has never been told. Amelia takes a look at a broken mask and the stories begin.

The mask revolves around a house where a woman killed her own husband with the two daughters being sent to an asylum. A group of college students go to the now abandoned house on the anniversary of the murders and find themselves picked off one-by-one by a woman wearing the mask. A doll is the tale of a young boy who is given the doll for a Hanukkah gift. When the babysitter intends to rob the house, the boy learns that the doll can come to life and help him in the situation. A bloodied Santa suit reveals the story of a man who on the brink of losing both his promotion and wife to his co-worker makes him go insane on the night he dresses as Santa for the office party. Finally, when the shopkeeper notices Amelia’s ring, she tells the story of how she earned it.

Holiday horror films have been a staple for many years and the trend continues on with this latest film, which serves as an anthology with many tales revolving around more than Christmas, but adds a dash of Hanukkah and cults, and serial killers. However, the film itself is revolved around a mysterious store with artifacts with the stories around the items serving as the basis for the anthology. Jeffrey Combs, the legendary horror film vet, plays the shopkeeper himself. Combs really brings out a bit of the slyness in the role of a businessman, a very sly man who sues the stories as his way of selling the items.

The stories are both a hit and a miss. This reviewer’s favorites are without a doubt “The Hand That Rocks the Dreidel”, the Hanukkah tale of a boy who learns he can bring his new Rabbi doll to life to help him handle a situation involving his trashy and conniving babysitter, played in a shocking psychotic performance by Amber Stonebraker; and “Christmas Carnage”, which Joel Murray breaks out an excellent performance as a man who finds both his promotion and wife lost to his more amped up co-worker. Add a new kind of pill and alcohol to the mix and it becomes Silent Night, Deadly Night 2019! The other two stories, opening “Dollface” and the final “Room to Let” are not bad but not as good as the other two.

The scenes opening and in between the stories are quite fun with Combs bringing his charm to Meagan Karimi-Naser’s Amelia. However, while her story, the aforementioned “Room to Let”, isn’t as exciting as some of the others, the final ten minutes of the film as a whole, where we are back to the shopkeeper and Amelia are quite interesting and a bit jaw-dropping as well.

Holiday Hell is an anthology that is quite a mixed bag. Two stories really stand out while the other two seem to be a bit forgettable. However, the shopkeeper scenes are quite fun to watch to see Jeffrey Combs at perhaps his most slick in terms of characters.