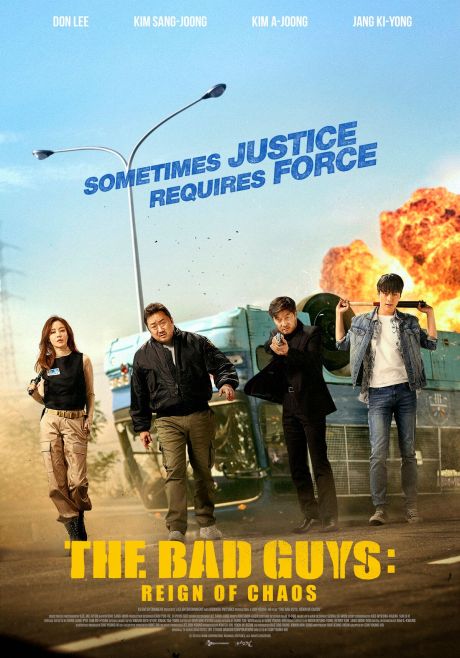 A Korean series gets a big screen adaptation that turns up the action thanks to excellent performances from its cast.

During a last-minute prison transfer, a mysterious figure causes the prison bus to overturn and goes after the guards and the police escorts. Despite an effort from ex-policeman turned inmate Ko Yoo-Seong to stop the perpetrator, officer Yoo is put into a coma. On a two-day leave to pay respects to his old friend who became a gang boss, ex-gangster enforcer Park Woon-Chul is extremely mad as hell and he wants to avenge the one living person who cares about him. He and Ko soon get the chance at redemption.

Captain Oh Koo-Taek is in charge of the “Special Criminal Task Force”, a somewhat covert team of operatives made up of inmates who are tasked with other criminals in exchange for lighter sentences. Ko and Park jump at the chance for lighter sentences as they agree to help track down the criminals who have escaped. Along the way, they find themselves joined by Jessica Kwak, a woman who was just busted for being a con artist. Together, this is one team who along the way, discover something very sinister about who is responsible and will go to great lengths to stop them not only for lighter sentences, but for Park, revenge for his friend.

Based on a hit television series, this film adaptation is one that you do not necessarily have to watch the series to get because the premise is revealed. Han Jeong-Hoon’s screenplay pits a covert team of inmates to take down their own kind in order to get freedom or lighter sentences. Son Yong-Ho directs the film with the visual flair of a Hollywood blockbuster film, with excellent set action sequences, full of explosions, gunfire, and fight scenes galore.

Leading the cast is Train to Busan and Marvel’s Eternals actor Don Lee (Ma Dong-Seok), whose character of legendary enforcer Park Woon-Chul may be ruthless in terms of action, but shows humanity when it comes to his relationships with his former friend turned boss who passed away as well as the female police officer who he felt treated him like a human being unlike others who see him as an object to kick some serious butt or as a beast. Evan Jang Yi-Kong’s ex-cop Ko sees Park more of a beast when they first meet because let’s face it. Lee has that look that screams “intimidation”. Meanwhile, the third inmate of the group, Kim A-Joong’s Kwak No-Soon aka Jessica, exudes that eye candy that in her opening scene, gets the attention of the inmates before all hell breaks loose.

The action set pieces are exciting to watch. From collisions to explosions in the first major set piece to the fight-filled finale, which Park, Ko, and Jessica discover who is responsible for the breakout. That alone becomes a major twist to the film as it goes in one direction then goes in another, but well-paced. Lee especially shines in the finale because if you enjoyed seeing him take on zombies unarmed in Train to Busan, you will definitely love to see what he can do with gangsters in this film as he unleashes some unrelenting fury, even calling them out when they stop to surround him mid-fight.

The Bad Guys: Reign of Chaos is an exciting action-comedy that is well-paced and fun to watch, especially seeing Don Lee’s fight scenes and the twists and turns with the plot. A fun example of Korean action cinema today.