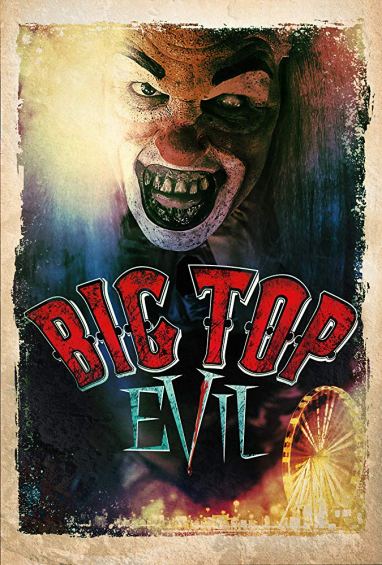 A circus of horrors awaits a group of people in this indie film that is a welcome meshing of 2001 Maniacs, Clowntown, and Natural Born Killers wrapped up in one bloody package.

Serving time for a murder he didn’t commit, Jay is meeting with a new lawyer and she asks him to tell her everything that happened on that fateful day. Jay was one of two groups heading to Mangrove County as they are fascinated with the “Mangrove Slasher”, who allegedly murdered a band of people years ago and was apparently never caught. However, en route to their destination, the nerdy Donny loses the map and it is when they head to a gas station that they meet Candy, a young woman who lives up the road and works as a trapeze artist at the local circus.

However, this is no ordinary circus. The owner and proprietor, Mr. Kharver, has been kidnapping the talent and forcing them to do their jobs right or he will kill them. But, it’s about to get worse as the clowns involved with the circus are sadistic backwoods cannibals who are thrive of finding new victims. Candy, who is revealed to be one of the deadly killers, coerces the group to enjoy the circus but as they soon learn, their enjoyment soon turns into terror as members of the groups are picked off one by one by the deadly circus brigade.

From the duo of Sean Haitz and Chris Potter comes this indie horror film that starts off with something different as the film is more of a flashback as we learn that the only survivor is imprisoned for the death of one of the victims. Haitz himself plays Jay as he attempts to go over everything with his new lawyer in hopes for a retrial due to the fact that the body of his so-called “victim” was never found. In the flashbacks, we see Jay as someone who is forced on the trip as a means to get over his broken relationship due to the fact his girlfriend left him for another friend of theirs.

The diverse cast of characters are what one would expect in a horror film of this magnitude. We have the pompous rich girl who thinks she’s better than everyone else; her almost as arrogant boyfriend; the nerdy troublemaker; and the nice girl. In addition, there are two biker-like robbers who go on some sort of Natural Born Killers-like killing spree. Add to the mix the redneck girl Candy, well played by Austin Judd, that the film will remind you of the classic 2000 Maniacs and its modern reboot 2001 Maniacs, and speaking of that film…

Horror legend Bill Moseley is always great in any role he takes on and this film continues to prove his legendary status as he plays the proprietor of the deadly circus, Mr. Kharver. Sporting a look that even King Diamond would possibly be proud of, Moseley gives it his all in the role of the crazy circus owner who thrives on making his circus a success, even if it costs death amongst the talents. His assistant, Skid, played by Diamond Mike, is pretty sadistic himself but tends to be a little short of attention when he just wants to kill despite Kharver’s telling him not to because it would cost him more talents. Another horror great, J. LaRose, makes the most of his cameo as a backwoods farmer who warns the group to stay on the highway, but knowing what we are dealing with, it is clear they won’t listen.

The special effects are well done. In the age of CGI, indie horror as of late has relied on the good ol’ practical effects and one can only thank God that this was done using that manner because CGI would have messed it all up. There are even underlying nuances of what to expect when there are shots of food being eaten in extreme close-up fashion, as we are dealing with some sick clowns in the film, ones who from seeing the first unnamed victim fall to their sadistic ways, brings a sense of gross out. This would just be the beginning as the scare scenes really hit you right in the throat.

Big Top Evil is another wonderful film meshing clowns and horror but adds the likes of films such as 2001 Maniacs and Natural Born Killers, with a smooth-running 81 minute runtime full of gore, scares, and a few twists here and there.