Katie Stevens has been a lifelong performer who got her major start as a contestant on American Idol, which would lead into a successful career in film and television. She made her major acting debut on the MTV series Faking It and is currently on the series The Bold Type. After a successful feature film debut in the horror film Polaroid, Stevens takes the lead in Haunt, a thriller from producer Eli Roth and the writing team behind A Quiet Place. The film comes to theaters, On Demand, and Digital on September 13 from Momentum Pictures.

World Film Geek got the chance to talk to Stevens about her first lead role in the horror genre. 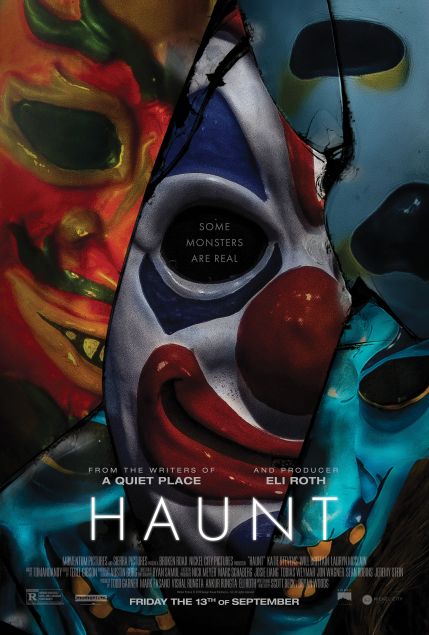 Thank you so much Katie for talking about Haunt. This was a fantastic film that was both very tense and thrilling and jumps at you at the right moments.
Thank you so much! I am so happy to hear that!

What attracted you to the role of Harper?
I usually get to play the character who is the girl next door who is neurotic, outgoing, talkative and has all these dreams and aspirations. When I read for the character of Harper, I saw it was totally different from those type of roles. She is in abusive relationship. She is very secluded and feels like an outsider. She doesn’t know where she stands and where she belongs.

And what really attracted me was the underlying theme of female empowerment and how it’s not the typical movie where the guy is saving the girl. It’s more about the girl finding it within herself to leave behind being a victim and make the choice and save herself and find the strength within herself to survive.

That is awesome! What was it like working with writer/directors Scott Beck and Bryan Woods?
They are unbelievable. When I first auditioned, I found out that they were interested in me, but I didn’t have the role yet. I did a Skype meeting with them and we talked about the character and their thoughts on her. They asked me my opinion and what I could bring to the role. I felt it was important in today’s climate to show that women are strong and sometimes we do succumb to our weaknesses, but we do have a voice and we be our own heroes and advocates for ourselves.

And with each of these characters, it’s not like the typical “here are a bunch of characters who will just die.” It’s like here’s the characters and you get to know each of them and so it gives you a sense of feeling heartbroken when you know these things are going to happen and let’s face it. If you don’t care for the people who get killed in these films, what’s the point?

Exactly!
Yeah, and Brian and Scott were just awesome to me. It helps that I didn’t come from a super horror background. I’ve never been an avid horror film fan because I’m a scaredy cat (Laughs). But I think I go see horror movies and working with them, doing the research by them sending me horror movies to watch before shooting. I used that as an educational experience and I got to learn so much more, such as the difficulties and nuances to making a horror film because no two horror films are really alike. It was really awesome to see their passion of horror films and what goes into that. I was honored to be a part of that.

And speaking of people who you have to care about, this had a great cast from Will Brittain and Lauryn McClain to Andrew Caldwell. What was it like working with the cast because you all seem so close-knit on set?
Actually, Andrew Caldwell and I have known each other for many years. He was one of the first people I met when I moved to Los Angeles so we’ve been friends for a long time. It’s funny because when I was the first one cast, I was looking at the character of Evan and I thought right away, that’s Andrew right there. I didn’t have any influence but when I got the cast list and saw Andrew’s name for Evan, I was like “No way!” (Laughs).

What I found very interesting is that the killers of the film all wore different masks, showcasing different personas and they don’t really get identified. Was there a villain you felt gave you the most scares or tension during shooting?
I mean they were all so equally terrifying, but one that struck me was Damian Maffei, who played the Devil. I wasn’t allowed to see their make-up because they wanted to bring that authenticity of the fear. There’s a scene where I’m in the red room and he puts the pitchfork up against my face. I think it’s Sam, my abusive boyfriend and he takes off the mask and asks “Who’s Sam?” That was the first time I saw Damian in make-up. It was the first time I saw his face and it was pretty wild! I ended up talking to the make-up artist who spent seven hours doing this and I told him how cool it was!

The ghost one was the most unsettling in terms of his make-up and what I loved was that you get tricked into thinking he’s a good character. The make up effects were incredible. The best part was that Bryan and Scott made it a point to let everyone know that these killers are real people. It speaks to the fear of the climate we are in this year in the United States. The notion is that there are people who are insane and want to cause harm for no reason. When that’s rooted into reality, it does become scary because it is a possibility. I think where horror is going as a genre, it is becoming that reality. Look at Jordan Peele’s Us and Get Out and those are rooted in today’s society.

We don’t want to give the idea of anyone doing a haunted house and killing people, but more like how do we make this film without giving anyone that idea and give the idea of people being aware of their surroundings.

Finally, with Haunt coming this week, what’s next for you?
I’m currently in the midst of shooting season four of my series The Bold Type. We finish shooting our 18 episodes in March. Then, I want to do more films. I like the idea of experiencing doing a complete thought because on a series, you shoot, and it leaves on an opening and you ask yourself, will the show go on, will I get the complete story as it is told? So, it felt great to do a film where it’s beginning, middle, and end. Eventually, I do want to get into directing. There are a lot of aspirations and dreams, so I hope to go that route eventually.

I will say, after your great performance in Haunt, I would love to see you do another horror film, maybe get a chance to direct one.
Oh thank you so much! I have to say that would be awesome! As they say “From your mouth to God’s Ear”, let’s see what happens (Laughs)

Haunt comes to theaters, On Demand, and Digital on September 13. Anyone who loves a good haunted house film but wants something very different and realistic will want to see this. Katie, thank you so much for taking the time to talk about the film.
Thank you for having me! It was a pleasure!

A Special Thank You goes to Katrina Wan PR and Katie Stevens for making this interview possible.