Richard Bates Jr. (center) is a storyteller who got his start making a short film titled Excision, which a few years later would progress into a feature film version. He would follow it up with two more feature films, Suburban Gothic and Trash Fire, followed by the short film White Lung: Below. Bates returns to feature films with his latest, the thriller Tone-Deaf, coming to select theaters, On Demand, and Digital on August 23 from Saban Films.

World Film Geek had the opportunity to talk to Bates about his latest film. 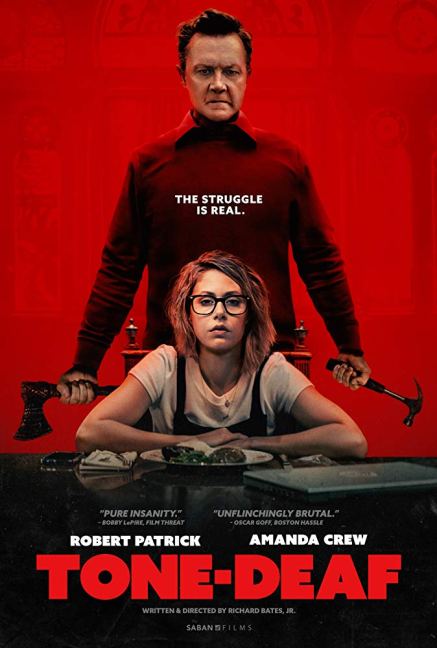 Thank you so much Richard for talking about Tone-Deaf. I saw the film recently and I actually enjoyed it as there were some great performances, some one liners. Overall, a great film.
Well, I appreciate hearing that. It’s kind of you to say.

What was your inspiration in writing Tone-Deaf?
This isn’t the most intellectual answer, but I was actually watching the news with my wife after the election and I asked her what scares her the most right now. She turned blankly to me and just said old men. So, I went to my corner and started to devise a way to make this film more interesting based on hearing that sort of perspective.

I’ve also been listening to a lot of music. I go to meeting after meeting out here and you have to work within the confines of five or six structures. In music, there are no rules. It’s all free. You can have a rock and roll album and have a rainstick in the music. There’s also the sampling with hip hop and rap music. The idea was to create this film with three intermittent tonal shifts, from coming of age comedy to slasher horror to absurdist comedy all with a satirical vent. Basically, to treat it as if we’re making a song, because things are so tense and strange, still, so over the course of 24 hours, I feel like I’m living in 20 movies, with different genres. So, the idea was to make a film that reflected while working with a more traditional narrative.

I felt the film had a bit of a double meaning with Olive being tone deaf in terms of her piano playing and Harvey becoming tone-deaf in his slow descent into becoming a psychopath.
Exactly! It’s strange but the fun part is working with Harvey, who stopped growing. He’s so set in his ways. He knows who he is and is open to nothing. And to pit him against Olive, who knows nothing about herself and by virtue, is open to everything. I mean Olive doesn’t realize she is even in a horror film until the final act.

You have a great cast including Robert Patrick, Amanda Crew, Kim Delaney, and Ray Wise. What was it like working with the cast?
Oh man, they were so much fun. The cool thing was that, well I made three films before this one. And no one says yes to my films without watching another one of my films. So, they know what they are in for. They know the approach will be outside of the box. We’re really going to go for it and build a heightened reality. We’re dealing with all these sorts of things now, and the film is sort of a cultural artifact. It would be really fun, and strange to watch this film in ten years and feel like “oh that’s how we felt back then”.

The cast was really game for these tonal shifts and character changes. They were ready to see how they were going to respond to the scenario in this genre that we’re in right now before they go to the next and back to the next. So, it allowed them to do bigger things. Give them this freedom of limitless possibility with this character.

Robert came up with the best line of the film. It was set at the bar and I kept sneaking him different drinks. And I can tell you this. Robert Patrick has never ordered a Shirley Temple before. So I went to the bar and sneaked him a Shirley Temple and he completely rolled with it and said “Don’t hold back on the cherry”, which is for whatever reason I loved that line. But there was great camaraderie and we had a blast on the set.

How long did shooting take and were there any difficulties you had to face?
We had 20 days. It was actually 2 more days than my last film. The last one took place in 2 locations. By virtue, the fact I make these more off the wall films, it’s hard to get financing. I actually got this one financed and at the last minute, we were ready to go and the producer backed out. So, it’s something I’ve become used to. That was one difficult thing, going to square one and feels like you want to give up, but you can’t. So we went for it.

I have to say, this had some great one-liners, notably from Robert, Amanda, and Kim, who gave a hilarious one-liner in the final act. I was busting out laughing so hard.
That’s really cool to hear! My approach with the dialogue from looking at this from the standpoint of it. It is like a cultural artifact. So it’s basically, how people are saying things these days, from the Internet and social media. Subtlety is dead. Why are movies still a good or the right thing to create a one-note tone poem with such vagaries? People say what they want and are blunt nowadays. I wanted to reflect that with the dialogue. They’re fighting for the movie. For instance, Harvey’s not going to be confined to the screen. We wanted to make him talk to the screen.

Are there any new projects in the works that you can talk about?
Yeah! I wrote this pagan comedy about a coven of witches that no one will finance because, well, it is a pagan comedy (laughs). I handed the script to my friend Matthew Gray Gubler (co-star of Criminal Minds and was the star of Bates’ Suburban Gothic) and he loved it. I put so much heart into the movie and we just said “f**k it”, let’s do it! So, we’re shooting at each other’s houses and at some friends’ houses in just under a month. We’re not going to let anyone stop it.

Tone-Deaf is coming out on August 23. Anyone who is in for a good ride of something more than a slasher film will definitely enjoy this one. Thank you, Richard, for talking about the film.
Thank you for having me!

A Special Thank You goes to Katrina Wan PR and Richard Bates Jr. for making this interview possible.