Nick Hamm is an award-winning filmmaker whose done it all from films and television to the stage. He’s earned the BAFTA for his 1991 short film The Harmfulness of Tobacco and won the 2017 Leo Award for his work on the series Rogue. Collaborating with screenwriter Colin Bateman, Hamm worked at first on The Journey in 2016. Their second collaboration, the biopic Driven, is coming to theaters, On Demand, and Digital on August 16 from WME Global and Universal Pictures Content Group.

World Film Geek had the opportunity to speak with Hamm about the film. 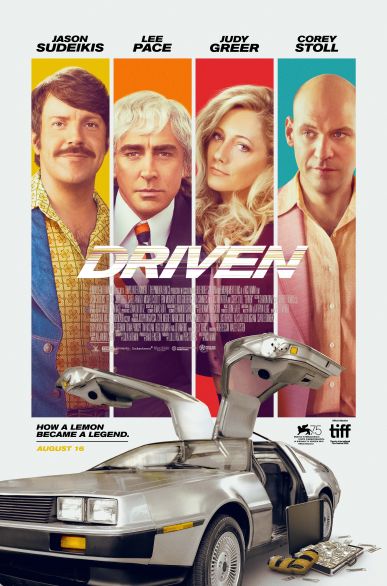 Thank you, Nick, for talking about Driven. I found this film to be very exciting thanks to the performances by Jason Sudeikis and Lee Pace with a great story about a scandal that’s not really been well-known by today’s standards.
Oh, thank you so much! I appreciate it!

What led you to direct the film?
I was thinking about the story and I have a writing partner, Colin Bateman. We did a movie called The Journey. We started looking at the whole DeLorean story a few years ago and what was the right way to bring the story because we’re both from Belfast and we knew about the factory in Belfast. We couldn’t really connect the dots and so we had to come up with a new approach.

The reason why so many people fail is that when you do a biopic, it was the wrong way to go into the story. When we discovered the character of Jim Hoffman, we realized this was a character we should include because well, he is a lying scumbag. Very appalling. When we researched him, we saw that in some ways, he was a disgusting human being. So, we decided to take a slice of DeLorean’s life, timewise, as you saw in the film, of that moment of time set in Southern California. Where two charlatans just happen to meet. That to us, was the catalyst of it.

I totally agree. Both DeLorean and Hoffman were these two bad people but somehow in the film, they gelled really well.
They both had a capacity. DeLorean was a showman and the complete definition of narcissism. I think that he was also streetwise. The first people to combine his lifestyle to what he was selling. He was the CEO who branded himself as part of the brand. Look at my hair, look at my martini, look at my 22-year old wife. If you buy my car, you can have this lifestyle. He was clever to do that, but not clever enough to make it work.

And then, he met this guy through their kids. His kids started playing with Hoffman’s kids. And that’s how that went down and that was truthful.

What was it like working with Jason Sudeikis and Lee Pace? These two were the no-pun intended “driving forces” of the film.
It’s a buddy movie. It’s a male love story that goes wrong. The securitist nature of their relationship goes wrong. We obviously victimized it. There are FBI tapes of DeLorean talking to Hoffman. You can look it up online and there are scripted pages of their conversations. Some of them are quite fascinating. You can see Hoffman set DeLorean up in a situation. What we were aiming at is what made these two men work together well.

With Jason, he’s such an endearing character to work with as an actor. I knew I couldn’t cast someone who was dark, and chippy, or angry. If I had done that, it wouldn’t have worked well. However, if I were to cast someone who actually can tell a lie and smile while telling that lie and not be threatening. Hoffman is not someone who is threatening. He’s more of a loser. Jason can play those everyman loser roles very well.

As for Lee, it was an effortless cool, like a 50s Hollywood star. He’s got a kind of ease that he can play. There’s a grace to him as an actor. He looks like DeLorean, moves like DeLorean, and eventually becomes DeLorean himself.

Lee’s become one of my favorite actors after seeing Marmaduke and especially, Guardians of the Galaxy and he’s just perfect casting as DeLorean.
He’s got it! As he gets older an actor, he’s going to be more interesting.

I understood you shot the film in Puerto Rico shortly after the devastating Hurricane Maria, just when you were wrapping up pre-production. How long did pre-production take before the hurricane hit?
We shot for five, six days and then this happened. We were devastated with what happened. We were all shipped off to New York because the insurance didn’t cover us. Some of the cast and crew were already there when it happened. What’s amazing about it is that you go back and realize what’s really happened and what you learn is that there’s no electricity.

They asked us to go back and it wasn’t a heroic act. It was an act of humanity and let’s finish the movie. It made it a level playing field. Because there are times when the picadilloes on a movie set comes, all those needs and egos and narcissism happen where ‘I want my trailer here’ and so on. All that Hollywood stuff disappears out of the window. We all stayed in a mini-bus.

This is what I call real dedication to filmmaking and just hearing this alone is mind-blowing. I’m glad to hear everyone overcame this and that’s one of the best stories I’ve heard.
This is one of those stories of Hollywood giving back. Usually, it is just about self-interest and rather selfish behavior. This is one occasion where while it was a bit self-serving, it’s more about helping out the infrastructure and this is an example of the film industry doing some good. It’s about us giving back and helping people.

Are there any new films in the works for you after this one that you can talk about?
Yes, Colin and I are actually working on our next film together. It will focus on Malcolm X and his meeting with Fidel Castro. Colin’s already written the screenplay so that’s going to be our next film.

That’s great! Driven comes out on August 16 in select theaters, on Demand, and Digital. This is a wild look at the DeLorean scandal with excellent performances by Jason Sudeikis and Lee Pace and the fact that the film industry gives back in terms of making the film truly will make this a great film to watch. Thank you so much Nick for taking the time to talk about the film.
Thank you so much. It’s been a pleasure.

A Special Thank You goes to Katrina Wan PR and Nick Hamm for making this interview possible.