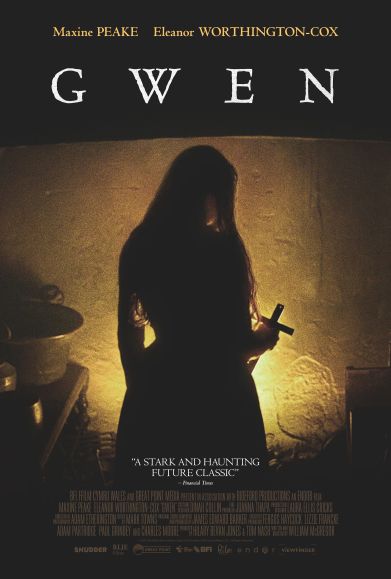 A trio of females must overcome various demons, including their own, in this dark haunting thriller from William McGregor, making his feature film debut.

It is the year 1855 in Snowdonia, Wales. Elen is a farmer who lives with her daughters Gwen and Mari. Gwen’s father is away serving military duty and mining has slowly taken over the town. The absence of Gwen’s father has begun to take its toll on the trio of women. Mining has slowly begun to take over farming and an unscrupulous mine owner has intentions to take over the farm. When Elen refuses, the next morning, Elen and Gwen find the sleep completely slaughtered.

Things slowly begin to take a turn for the worse as Elen finds herself suddenly sick. Diagnosed with epilepsy, Elen is bedridden and it is now up to Gwen to take over the farm until her mother is better. She finds herself constantly waking up to see more animals maimed or killed. Worried that the mother’s health could take a major toll, the doctor suggests that Gwen should consider selling the farm, but Gwen refuses. With everything going wrong, will Gwen be able to overcome everything that has happened and be able to save the family farm, or will it be too late?

William McGregor’s feature film debut is a dark tale about a teenager who finds herself becoming the woman of the house when she must tend to the family farm when the father is off on military duty and the mother becomes sick. Add to the mix that the film is set during the industrial revolution, farming has become outdated and a mine owner willing to go to any lengths to get the farm for his factories and you have a very haunting tale whose twists and turns don’t occur until the last third.

Eleanor Worthington-Cox gives a tour de force performance as the titular Gwen, who finds herself forced into a situation she never expected. Set in the mid-19th century in Wales, Gwen at first seems innocent and just a normal teenager until she is forced to tend to the farm. She goes to great lengths to keep the family farm intact. This becomes evident when the overbearing and overprotective Elen, wonderfully played with such authority by Maxine Peake, begins getting a seizure in her bed. The movie revolves mainly around the relationship between Gwen and Elen as they struggle to overcome anyone who tries to take the farm.

Kobna Holdbrook-Smith, as Doctor Wren, is perhaps the most sympathetic towards Gwen as despite advising Gwen to sell the farm, feels nothing but sympathy and compassion. The same can’t be said about Richard Harrington’s Edward Morris, who is part of the group who is attempting to convince Elen to sell the farm. When she refuses, it is clear that the mine owner and his goons use extreme measures to convince them to sell the farm, even though for the most part is not proven but more of an implied sense. The final fifteen minutes of the film are perhaps the darkest, from Gwen having a nightmare about her mother to a shocking finale that was definitely unexpected.

Gwen brings a slow build of tension that leads to an unexpected and shocking finale, but Eleanor Worthington-Cox delivers a tour de force performance as a teenager who is forced to grow up fast.