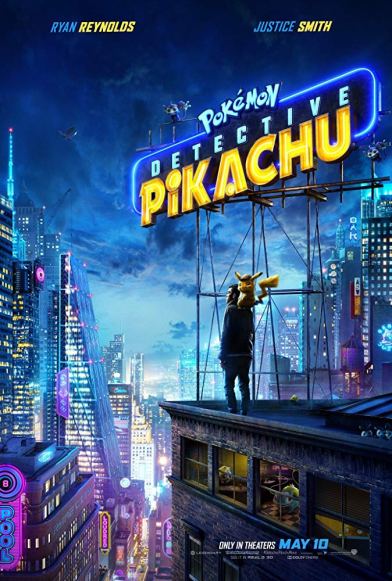 This is one Pokémon you would never expect but nevertheless, this is a fun and wild adventure with some great effects and a really good story.

Things have not been easy for Tim Goodman. An insurance salesman by trade, Tim had long dreamed to become a Pokémon trainer, but when his mother passed away and his father Harry mysteriously disappeared and is presumed dead, Tim had given up his dream. When Tim heads to Ryme City, a place where humans and Pokémon co-exist in harmony, to collect Harry’s things, things are about to turn upside down when a Pikachu arrives. Tim learns the Pikachu speaks perfect English and Pikachu is shocked to learn Tim can understand him.

Tim discovers a canister with the letter “R” and accidentally unleashes the gas from the canister, causing some Aipom to attack the duo. Pikachu reveals to Tim that he used to be Harry’s partner on the police force and they were in the middle of a case when Harry was involved in his accident. With help from aspiring investigation reporter Lucy Stevens and her Psyduck, Tim and Pikachu are determined to find out the connection between Harry’s disappearance and the mysterious canister of purple gas that makes the Pokémon get violent.

When it was announced that Pokémon would get a live action form in Detective Pikachu, it seemed as if it was met with tons of skepticism, especially upon hearing that Ryan Reynolds would provide both the mo-cap and voice of the beloved Pokémon. That is, until it was revealed a video game adaptation already was in Japan and then, it all made sense. The team of Rob Letterman, Benji Samit, Dan Hernandez, and Derek Connolly scripted the film and did quite an impressive job at utilizing twists and turns at the right moments and ends on quite a high yet shocking note at the same time.

With his iconic performances In Van Wilder and of course, the Deadpool films, it is clear that Ryan Reynolds was perfect casting for the voice of Detective Pikachu. He has that comic timing that fits perfectly with whoever he works with. In the case here, Justice Smith makes for a good partner in Tim, who while on his adventure finds his lon-lost passion somewhat revitalized while still freaking a bit out as to why he can understand Pikachu. While Reynolds does most of the voice work, fans will get beats of the original voice actor behind Pikachu, Ikue Otani, giving her trademark Pikachu sound because Tim is the only one who can understand the Detective, aside from the audience of course.

Kathryn Newton makes for a good partner as Missy, ummm, sorry, Lucy, an aspiring reporter who helps Tim with his investigation and has her own Pokémon in Psyduck, who just by looking at him, looks both creepy but provides tons of comic relief with Pikachu on the adventure. Bill Nighy, since his days as Davy Jones in the Pirates of the Caribbean, looks like he is having fun at times in the role of Ryme City creator Howard Clifford. Some of the film’s highlight scenes involve a battle ring that gets serious when in a scene reminiscent of a 2002 Japanese action film, Blood Heat, the Charizard is given the purple gas prior to his fight against Pikachu, making the fire-breather a force to be reckoned with and Pikachu’s reaction couldn’t be funnier. The iconic Mewtwo also appears and plays a very pivotal role in the film, especially in the film’s third act.

Pokémon: Detective Pikachu is a worthy live action adaptation of the Pokémon universe. It is a fun ride and who better than Ryan Reynolds to drive the film and bring his comic timing with his co-stars. If you like Pokémon, then you will definitely enjoy this one.