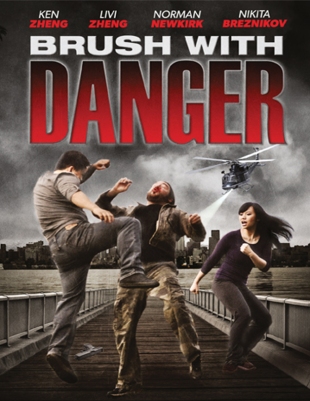 Two immigrants find that living a better life has its price in this indie action-drama from indie filmmaker Livi Zheng, who also stars.

Arriving in a shipping container in Seattle, Ken and Alice Qiang are looking to start a new life in America. However, they find from the beginning that it’s not easy. Alice is an avid painter and Ken is a martial arts expert. While living on the streets, Alice attempts to sell her painting while Ken displays his skills, earning the siblings enough to get by for the day. When they help stop a robbery, they are treated by local diner owner Elizabeth. However, when Justus Sullivan, an art gallery owner, sees Alice’s paintings, he gives them an opportunity.

As Ken and Alice begin to stay with Sullivan, Ken has grown tired of staying all day at the house while Alice focuses on her art. However, impressed with his kickboxing skills, Justus introduces Ken to the world of illegal fighting, which is set inside of a local boxing gym. Ken is able to impress the in-charges with his skills. Meanwhile, Alice is asked to copy a rare Van Gogh for Sullivan, who intends to send the painting to a notorious crime lord. When the crime lord learns of the forgery, he intends to go after everyone involved and for the Qiang siblings, it will become a fight for survival.

Indonesian-born producer and martial artist Livi Zheng attempts to break in the U.S. market with this indie action film. The film also marked her directorial debut and only role in front of the cameras. The story, about two siblings coming to Seattle to start a new life and live the American Dream, has been done before, and the title has a double entendre. The title both refers to what happens between the two when they are forced into action while the “brush” of the title also refers to Alice’s dream to become a well-known artist.

While Livi Zheng proves a sense of capability in terms of direction and her role of Alice, who is struggling to start life anew, she leaves the script to her brother Ken, who plays her brother in the film. Ken makes the most in terms of his role as younger brother Ken, an aspiring kickboxer who makes extra cash by fighting in illegal gym fights. However, the problem with the script arises in some unintentional racist beats. For instance, in the case of a pickpocket robbing a woman, the woman sees the Qiangs and says, “Oh Thank God! Asians”, bringing to mind the generalization that all Asians can fight, which is not always the case. Alice will keep referring to “her country” but never fully reveals where she and Ken are from, but one can think possibly Mainland China or somewhere in that area.

The fight scenes themselves mainly highlight Ken Zhang’s skills as a kickboxer. He gets to show off some Muay Thai with a dash of grappling. In other words, a style similar to MMA but more of a kickboxing style. The surprise is Livi Zheng as well, who gets to showcase her martial arts skills in a few scenes during the film. Livi herself gets to show some kung fu and a bit of wushu in her fight scenes. The final beat down, which the Qiangs defend themselves against the mob, holds its own quite well for a throwback to early 90s B-movies.

The only issue with Brush with Danger seems to lie in its unintentional beats of racism in the script. However, if you’re a fan of 90’s B-movie martial arts films, then you might actually enjoy the fight scenes here. The film is an overall decent attempt at recreating the 90s B-martial arts film and Livi Zheng is capable of directing a film. If she directs again, maybe her next film will be an improvement.