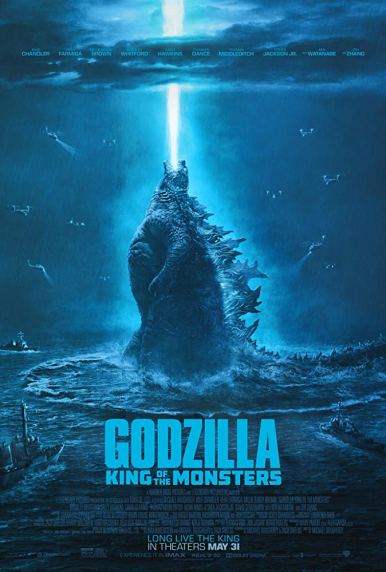 Five years after he reappeared in a film done right by Hollywood, Big G is back and this time’s, he’s not alone!

It has been five years since Godzilla emerged from the sea and battled the MUTOs in San Francisco. While the chaos ensued, the Russell family suffered an enormous loss as young son Andrew was killed in the wreckage. Taking the fall for what has happened, Monarch is now under scrutiny by the government, who feel they need to exterminate the Titans as more have been revealed to be in hiding. Menwhile, Maggie Russell, now a Monarch scientist in China, has unearthed a Titan who is given the nickname Mothra. When a group of ecoterrorists led by Alan Jonah hijack the base, Maggie and daughter Madison are kidnapped.

Maggie’s husband Mark, who has left town in order to avoid the issues with Monarch, has been alerted of the kidnapping. Dr. Ishiro Serizawa and Dr. Vivienne Graham, who had warned everyone about Godzilla five years ago, join Mark as they soon learn a horrifying discovery at a base in Antarctica. Maggie, who has finishing developing a sonar system called the Orca, has been forced to unearth Monster Zero, a hydra-like creature. When Mark discovers that Maggie has done something unimaginable, he and Monarch must attempt to find Godzilla, who has been dormant for five years. However, Mark still holds a grudge as he blames the hero monster for the death of his son. Can he be able to forgive Godzilla and prepare to be involved in a battle of epic proportions?

It has been five long years since we last saw Godzilla unleash havoc in Hollywood, in an adaptation that finally did Big G justice. While the military played a vital part in the original 2014 film, they play an integral part here, but now, we are given more of a scientist view of the story as the story focuses on not only the event that will become one of the best monster battles in years, but on the human front, a story involving terrorism, double crossing, and how science is vital for Godzilla to live up to its name.

While it is great to see Ken Watanabe and Sally Hawkins return to their roles as Monarch experts Serizawa and Graham, the former once again playing such an important role in the story, the focus shifts to an estranged family still reeling from the death of a loved one and the consequences of the grudge they hold. From what it looks like, it is clear that Millie Bobby Brown’s teen daughter Madison is the level headed one who has dealt with her brother’s death, but her parents, played by Kyle Chandler and Vera Farmiga, have their own ways of having dealt with it. In the case of Chandler’s Mark, he is on the side of the military, thinking that all Titans should be exterminated at first. In the case of Farmiga’s Maggie, she intends to think, like Serizawa, that Titans and humans can co-exist, but does it using duplicitous methods.

Newcomers to the franchise include Charles Dance, who continues to prove himself to be one of the great villain actors in the role of Alan Jonah, an ex-military officer turned ecoterrorist who intends to unleash some very bad monsters to wreak havoc; Bradley Whitford and Thomas Middleditch, who provide some comic relief in their roles of Dr. Stanton and Sam Carlson respectively. Zhang Ziyi bring something interesting to her role of Dr. Ling as for those familiar with the Mothra films can take a pretty good guess.

Once again, T.J. Storm does an excellent job performing the motion capture for Godzilla himself while Rampage’s Jason Liles goes full speed ahead in the role of Monster Zero, or as tokukatsu and kaiju fans will know him as, King Ghidorah. The monster battles are quite exciting and bring some tense moments amongst the humans. When the military, led by Aisha Hinds’ Foster, get involved, it feels like the viewer is there right with them. However, the family dynamic involving the Russells tend to bring a little annoyance that slightly brings the film down as this is one family that is constantly bickering due to different viewpoints.

Despite the amped-up family drama, Godzilla: King of the Monsters is slightly better than the original. The action is exciting, notably the monster battles and there are some pivotal twists in the story that just adds a notch to making a Godzilla film done right by Hollywood. This will make you get stoked for Godzilla vs. Kong¸ coming next year.