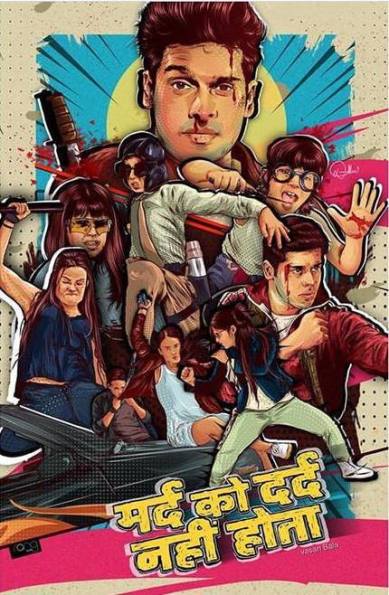 The world of Bollywood gets its funny meshing of comedy and martial arts in this Kung Fu Hustle-esque film from director Vasan Bala.

After his birth, Surya was nearly involved in a robbery in which his mother dies en route home via motorcycle. Surya falls off the motorcycle, but is revealed to have a condition called congenital insensitivity to pain. As a young boy, Surya experienced bullying but always received help from Supri, a young girl who is both attracted and deterred by Surya’s condition. Surya’s father only wishes for his son to be normal. However, Surya’s grandfather sees potential in the young boy and has him watch VHS tapes of action films. When Surya sees Mani, a one-legged karate master defeating 100 men in a kumite, Surya is determined to become a karate master.

Years has passed and things have changed. Supri and Surya had separated after the latter nearly killed the girl’s father for his drunken abusive behavior. When the now adult Surya sees a poster of his one-time idol, he sees a young woman rescuing another young woman. The fighter is none other than Supri, who has since become the protégé of Mani. When Surya discovers that Mani is now down-and-out due to a rivalry between him and his evil twin brother Jimmy, Surya decides to use his knowledge of martial arts to help Mani out. When Supri discovers Surya, she questions herself as she finds herself in the same situation as her mother was years ago. When Jimmy steals Mani’s necklace that their late karateka father gave him, Surya, Supri, and Mani must overcome their issues and join forces to take on Jimmy and his men.

When this film was internationally announced at the Toronto International Film Festival, fans were getting ready for a wild ride. The story of a young nerdy character who can feel no pain and his dream to become a martial arts master sounds quite interesting. However, writer-director Vasan Bala has opted to make this an action-comedy that has some fun moments that will make Stephen Chow proud.

Newcomer Abhimanyu Dassani is wonderful as the adult Surya, who spends his time walking around town, sporting goggles, and sporting a backpacked-sized water canteen. He brings a nerdy look but also possesses the physical skills to be able to pull off the martial arts sequences. As for female lead Radhika Madan, she gets to pull off a great acting performance as Supri, who is not so much a love interest, but more of a reliable ally to our titular hero. In addition, her original dance background allows her to showcase some martial arts skills.

Gulshan Devaiah does double duty by playing two brothers. The first is another protagonist, Karate Mani, a one-legged karate expert whose inspiration causes Surya to become the martial arts hero he is destined to become. The other role is Jimmy, the lead villain whose mannerisms will remind viewers of Danny Chan’s Axe Gang leader in Kung Fu Hustle. And the back story between the brothers is done in musical fashion, but not in the Bollywood style you would expect, but it still holds in own in a funny way. He gets to show different emotions in the roles, down and out in Mani and slick yet not exactly sharp as Jimmy.

The action choreography is done by the duo of Eric Jacobus and Dennis Ruel. For those unfamiliar with their brand of action, Google them or go to YouTube and check out their viral videos. These two are inspired by Hong Kong-style action and get to bring their prolific style to Bollywood. While some of the techniques used by Dassani feel repetitive, it still plays off well. Dassani is able to showcase some great tornado kicks and flying kicks when needed while Madan has some pretty nifty spinning kicks. Devaiah has to only use one leg and handwork for his fights as Mani as the character does only have one leg.

The Man Who Feels No Pain (Mard Ko Dard Nahi Hota) is a fun ride that meshes comedy and action with comedy reminiscent of a Stephen Chow film with a dash of Quentin Tarantino and some awesome action from the duo of Eric Jacobus and Dennis Ruel. Check it out as it is currently on Netflix.