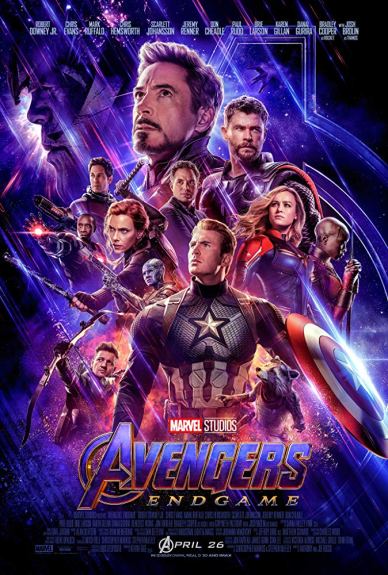 The moment everyone has been waiting for as Earth’s Mightiest Heroes are set to face their greatest challenge in the blistering finale of the Marvel Cinematic Universe’s Infinity Saga.

After the fallout from Thanos and the Infinity Gauntlet, Iron Man and Nebula are in space when they find themselves rescued by Captain Marvel. On Earth, Steve Rogers, Thor, Black Widow, Rocket Raccoon, War Machine, and Bruce Banner are all shocked to see Tony is okay and upon learning of Thanos’ location, they confront the Titan who destroyed half of humanity once and for all.

Five years later, everyone has moved on. Steve has become a grief counselor. Black Widow has become the new leader of the Avengers, working primarily with Captain Marvel, Okoye, and War Machine. Thor has found a small town to make the New Asgard. Tony is happily retired, married to Pepper Potts, and is a father to young Morgan. They are still reeling from the events that have happened and they feel nothing can be done. However, when Scott Lang, the hero known as Ant-Man returns from the Quantum Realm and discovers what has happened, he may be the key to help the Avengers out in their greatest and most dangerous adventure yet.

11 years, 22 movies and it has all come down to this. As Doctor Strange stated in Avengers: Infinity War, this is the “endgame”. The Russo Brothers are back with this three-hour film that can be summed up in one word: Epic. With a capital “E”. This is the culmination of the first three phases of the Marvel Cinematic Universe that all began with 2008’s Iron Man, which brought Robert Downey Jr. in the titular role.

The film is so exciting to watch that it doesn’t feel like you are watching a three-hour movie. It is a phenomenal mix of emotions throughout the film plays out in a three-act mode. The first act is the aftermath of Infinity War followed by a smoothly paced second act set five years later in which time travel becomes an important factor (which involves hilarious references to classic time travel movies…talk amongst yourselves) and then, the third and final act which consists of one of the greatest epic battle sequences that make those like the Lord of the Rings trilogy look like nothing!

The cast once again shows why this universe is one of the most successful in cinematic history. Robert Downey Jr. brings a sense of both emotion and comic wit as Iron Man while Chris Evans once again brings that sense of optimism as Steve Rogers, who thanks to Tony once again becomes Captain America. Chris Hemsworth is at his angriest at first as Thor but it is his funniest in the second act sporting quite a look on him that will make mouths drop. It is great to see two Ragnarok characters return in Valkyrie and Korg in brief appearances. And if that’s not crazy enough, it is clear we see the Hulk again but this time, everyone will be in for a major surprise with that character.

The film as a whole, especially if you have been watching the MCU since its inception, will make everyone feel a range of emotions from high cheers to tearjerker moments that will make you break out the Kleenex. There are many twists and turns that make you feel like you’re not watching a three-hour film.