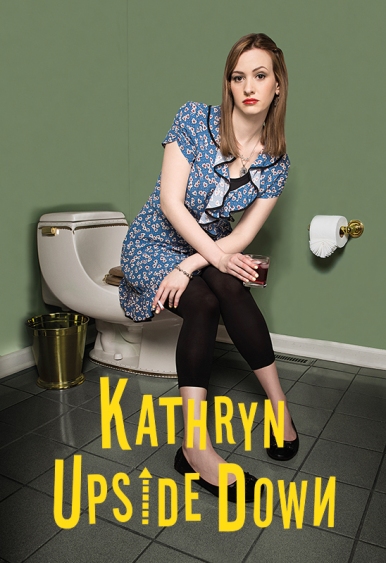 This pretty funny indie comedy definitely has found its breakout star in Allie Loukas, whose mannerisms will bring the likes of Ellie Kemper and Ashley Clements to mind.

Kathryn has had a rough life since her mother Elizabeth married the domineering Todd. Her work life as a fashionista has not gone so great either, with her co-worker always hounding her. Hoping she finds a change in her life someday, it all happens at a social event at home. When the toilet is clogged, her mother asks Kathryn to call a plumber. Bob O’Link, the plumber who arrives, is shocked to learn that Elizabeth is the woman he met 25 years ago and had a one-night stand with and that Bob is Kathryn’s biological father.

Kathryn, having enough of Todd’s domineering ways, moves out of the house and with Bob’s help, moves to an apartment with Raymundo, a friend of hers. As Bob and Kathryn slowly begin to know each other, Kathryn finds herself moving to a better place within her. However, when Kathryn shows Bob a piece she has written, he finds himself proud of her and in the midst of things, Bob and Elizabeth begin to slowly bond again, much to the chagrin of Todd. At a dinner, everything falls apart and despite his attempt to knock some sense into Kathryn, Bob finds himself at a crossroads. Will Kathryn be able to snap out of it and return to her better place?

You might not know the name Allie Loukas, but after seeing this film you will. Her big debut comes in the form of this film, which Loukas stars, directs, wrote, and produced. She proves herself here she is an upcoming tour-de-force. As the broken Kathryn, Loukas channels the likes of comediennes Ellie Kemper and Ashley Clements with her performance as someone who has a chance for a change in her life upon the meeting of her long-lost biological father.

Loukas also was involved in casting and she couldn’t have found a better support system with this film as the chemistry between her and Christopher M. Walsh, as her real father Bob, is great as well as her comic chemistry with Carlton G. McBeth, as the flamboyant Raymundo, is just perfect. Angela Beckefeld’s Elizabeth also is a key figure in the story as like Kathryn, she slowly changes as it is clear that her husband Todd, played by David Bastian, is a total scumbag who thinks he can control her as he pleases and despises Kathryn because she is not his child.

Another comic highlight comes in the form of Matt Edmonds, whose character Gustav pops up and brings the ridiculousness to the film but in a good way. As for Bob’s partner Phil, played by Darren Marlar, he and Walsh have some funny chemistry as if this is what you would expect from real-life co-workers in the field perhaps. One being level-headed and one, well, not so much. The story is what one would expect, a little predictability, but nevertheless, one that will make you want to embark on a journey to see our titular character change in such a positive manner.

Kathryn Upside Down will definitely make you remember the name Allie Loukas, a star in the making with her comic-style wit and emotional range, bringing to mind the likes of Ellie Kemper and Ashley Clements. Check this film out to see a wonderful debut for her.