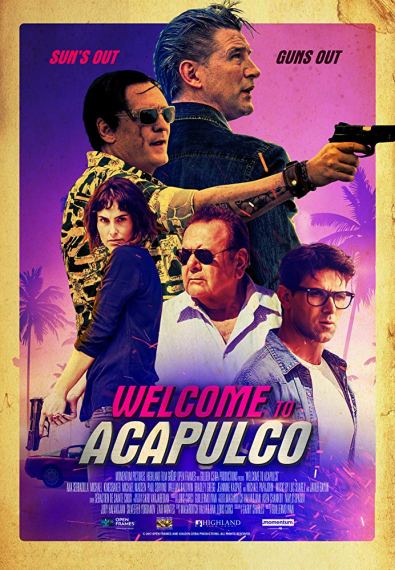 A video game designer finds himself in a real-life situation in this hilarious action-comedy from director Guillermo Ivan.

Matt Booth is a video game designer whose action-style shooters have not been faring well. However, on the brink of making his most ambitious project yet, he is invited to present the new game at the annual Video Game Awards in New Mexico. When he arrives to the airport, he runs into an old friend, Anthony, who convinces a reluctant Matt to have a few drinks before heading on the airplane. Matt awakens on the plane and soon learns that he isn’t going to New Mexico.

Instead, he is shocked to learn that he is heading to Acapulco, Mexico. Upon his arrival in Mexico, Matt finds himself being followed by all sorts of people. He soon learns that the people who are following him want some sort of package. With nowhere to go and no one to rely on, Matt finds himself in a very tight spot. That is, until he meets the mysterious Adriana, who may be the only one to help him out of this predicament. With everyone hot on his trail, Matt must now not just rely on Adriana, but unleash something he’s only probably dreamed about and that is becoming the hero he has created in his games.

This film, directed by Guillermo Ivan, can be described as the definitive definition of a “wild ride” because that’s exactly what it is. From the moment the viewer meets our protagonist Matt, one thing is for sure. This is one guy who’s about to be in the wrong place and at definitely the wrong time. The film is exactly what you expect. A fun comedy-action film that has a wonderful balance of the two genres thanks to its ensemble cast with a virtual unknown as its lead, whose breakout is this film.

Michael Kingsbaker, more known for his work on the stage than in films, is one to look out for. As Matt, Kingsbaker brings near-perfection both in looks and his performance. He has the nerdy-style look for the role of a video game creator and a guy who is in the wrong place and wrong time to a tee. His reaction upon learning where the plane is heading is priceless. He also has the ability to do all of his own stunts, even going as far as having a stunt credit on The Dark Knight Rises. The action scenes allow Kingsbaker to go head-on in terms of the wild action shootouts and chases. In addition, he has some great chemistry with Ana Serradilla, who plays the mysterious Adriana, who is the only one who vows to keep Matt alive when it comes to this mysterious package that is wanted by everyone and their mothers.

Kinsgbaker and Serradilla are joined by an ensemble cast of veterans, all of whom play some sort of antagonist. It is great to see Bradley Gregg again on screens. The actor, perhaps known for his role in the 80’s horror films A Nightmare on Elm Street 3: Dream Warriors and Class of 1999, plays Anthony, Matt’s old friend who is responsible for this adventure or misadventure that Matt must go through. Michael Madsen is a shady bounty hunter, Hyde, who goes to great lengths and extremes to get this mysterious package. William Baldwin, as businessman Jake, brings a character reminiscent of his mysterious role in the action-comedy Maximum Impact, whose reason for wanting the package involves something similar in terms of his attempt to get to the Secretary of State in the latter. As for the legendary Paul Sorvino, he looks like he is having fun in the role of corrupt Senator Campbell, using methods seen in the movie that made him a film icon, Goodfellas.

Welcome to Acapulco is a “welcome” misadventure of a wild ride that should make Michael Kingsbaker a star as he is great to watch in his first lead role, allowing him to pull off both action and comedy to a tee. With the supporting ensemble, Kingsbaker should definitely do more films like this.