Matthew Brown is an indie filmmaker who made his name when he made his feature debut with Into the Treetops in 2015. He returns to features with Maine¸ the story of an unexpected bond between two hikers, coming to select theaters, VOD, and DVD on December 14 from Orion Pictures.

World Film Geek had the opportunity to talk with Brown about his latest film. 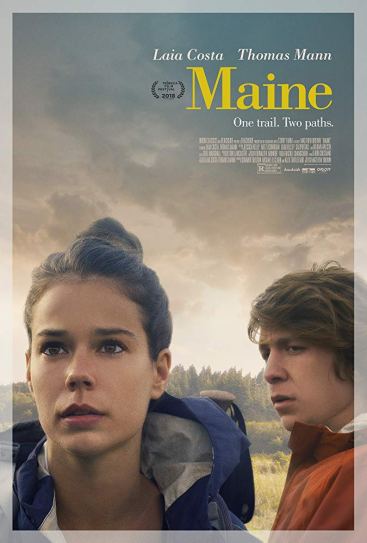 Thank you so much Matthew for talking about Maine. Having seen the film, I found it quite interesting with so many positive elements that made it a pretty good film.
Well, thank you. I’m glad you enjoyed it.

These characters are looking for answers that I was also looking for, being a mixed-up twenty something.

The driving force was the bond between Laia Costa and Thomas Mann, who had this natural chemistry on screen with the film’s technical aesthetic having a sense of a documentary. What was it like to work with Laia and Thomas on the film and did you allow them a sense of free rein on the film?
Definitely! It’s always been part of my style since the beginning, just try to get out of the way at times when it’s necessary. To give everyone a safe space to play with and explore. There’s no real wrong decision when it comes to the space. It is finding the most interesting choice and what tells the story the best. I definitely gave them a lot of freedom to have fun with it and bring ideas.

They brought a lot of ideas to the table. We would sometimes change during the day. Working with them was great because I think they appreciated that. Especially with Thomas, because I don’t think he’s been given that chance to get that freedom for a while with the material. I hope he appreciated that (laughs).

It looked he did, especially with the references to both Wayne’s World and SpongeBob SquarePants. That brought a sense of both a cultural and language barrier between the two characters, showing that natural chemistry between the two.
Yeah! What’s interesting is that originally, I wrote the role of Bluebird as an American woman. However, when I saw the film Victoria, I thought it was so fantastic. Laia’s role was my favorite female performance of that year, so I knew I had to have her in this film. It was quite interesting because when I met her, we did have that language barrier between us and even about the world.

We went camping together before shooting began and we thought about things about what to eat. And we found these SpongeBob mac and cheese boxes and she called them “Bob Esponja”. I was like that’s great. We had to put that in somewhere. Things change (laughs).

One thing that makes a great film is its opening, whether it can be a long take or something similar. You start the film with ten minutes of no talking. This was truly an ingenious move on your part. How did you come up with that idea?
Thank you! It was something I messed around with when it came to my senior thesis and it didn’t work well there (laughs). I was thinking why it didn’t work and I realized it was a short film I was doing. So that’s why it didn’t work. I can’t exactly tell a story that way when I’m doing a short film.

The idea though with this was to envelop the viewer in the sensory space of the trail and not so much the story. I wanted to connect in an animal way before connecting in a specifically human way. Because that’s what I think the trail does. It strips us down to a raw, kind of animalistic style nature.

What difficulties did you face during shooting of the film?
We were very fortunate with the weather. I spent a lot of time there and it could get very volatile. But, we were blessed. It was challenging though at times because it was clear that at times, the elements weren’t exactly welcoming our presence. A lot of it was waiting for the sun to come out behind the clouds, so that we could match some of the scenes in the same lighting conditions.

Whenever it would rain, our producer Summer [Shelton] would do a good job of thinking that when it would rain, we could theoretically shoot these scenes in the rain then change it on the day.

Finally, are there any new projects in the works?
I’m working on a new project called The Apocalypse. It’s about my experience of growing up in an all-male family. It was just my brother and my dad in North Carolina. I grew up with not much of a female presence in my life. It drastically affected my life. It’s sort of the worst case scenario of being surrounded by toxic masculinity when you have all males in your life.

Maine comes to select theaters, VOD, and Digital on December 14. This is quite a film about self-discovery that just has some great elements that make this a good indie film. Thanks again Matthew for talking about the film.
Thank you so much!

A special Thank You goes to Katrina Wan PR and Matthew Brown for talking about the film.

2 thoughts on “The Man of “Maine”: An Interview with Matthew Brown”