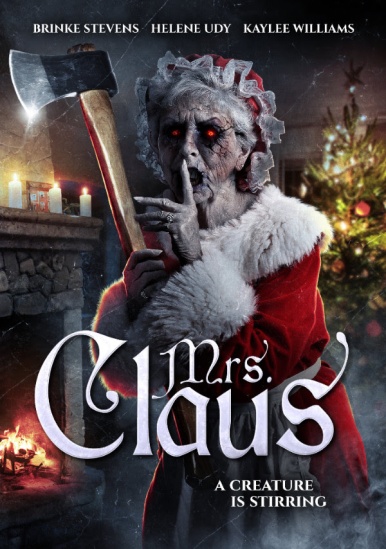 It is time for some Yuletide terror as the titular character becomes an insane killer in this throwback to 80’s slasher films.

Ten years ago, the members of sorority house Sigma Delta Delta were in a state of shock when a pledge named Angela, the victim of hazing and constant bullying, had enough and viciously murdered sorority head Amber before killing herself. Since then, things have been quiet for the most part. However, this year, Amber’s sister Danielle has decided to throw a Christmas party.

As the sorority prepares to gather their friends for the party, a mysterious e-mail is sent to Danielle from a “Mrs. Claus”, who vows to wreak havoc for the events ten years ago. The group involves members of the sorority and their friends and boyfriends. When Sophie, a sorority member, leaves and decides to go home for the holiday, she is killed by a mysterious killer dressed in a Santa outfit with old lady mask. The killer then proceeds to go after the group. Who is this mysterious killer? Could it be the “Mrs. Claus” that promised to wreak havoc?

Writer-director Troy Escamilla burst onto the horror film scene with Party Night and this is his follow-up, which revolves around some Yuletide horror in the vein of perhaps Silent Night, Deadly Night meshed with a dash of The Texas Chainsaw Massacre in terms of our titular killer. This is quite an inventive move having our killer sporting a Halloween style witch mask and Santa outfit, wreaking havoc on the partygoers at this Christmas party. The former movie is actually mentioned in the film from one of the most annoying partygoers, the typical chauvinist who even tells the gang that in order to avoid being killed, they have to be ugly. Cue the eye rolls.

The film makes good use of not only the young cast of potential victims, but some horror film veterans who prove that one, they still got the niche, and two, that they make the best of their appearances in the film. My Bloody Valentine’s Helene Udy, who had one of the best death scenes in that film, plays Mrs. Werner, the mother of bullied pledge turned murderer Angela, whose futile attempt at peace only gets Danielle more upset. Then there’s another legend, Brinke Stevens, who plays campus officer Julie Cornell, who sporadically appears in the most inept of times.

While the film does have a sense of predictability to it, what stands out in the film are the inventive kill scenes. Heather Benson’s special effects truly stand out and bring that sense of 1980s slasher films. There are some interesting ways to see these kills, including a use of a candy cane and some Christmas ornaments used as weapons. Yes there’s plenty of gore and as mentioned, there may be a sense of predictability, there are also some nifty twists in the story that make the 86-minute running time smoothly and keeps you guessing.

Mrs. Claus may have a sense of being predictable, but there are some inventive kills and some twists that make this throwback to 80’s slashers worth checking out.