Fabien Constant is a French documentary filmmaker and TV director whose work in the fashion industry has allowed him to do a documentary about Mad Men and the The Vogue Parish Fashion Night Out in 2010. He makes his feature film directorial debut on the drama Here and Now, in which he employs some of this trademark documentary style. The film is now out in select theaters, VOD, and Digital HD from AMBI Group.

World Film Geek had the chance to talk with Constant about his first experience making a feature film. 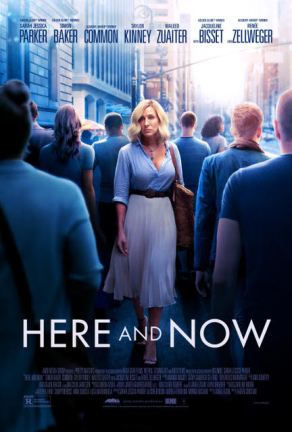 Thank you Fabien for talking about Here and Now. I saw the film and it was such a great film that had a great story that felt very real all because of the performances.
Thank you very much! That is what we’re aiming for, a story about putting things into perspective when your life changes.

I’ve noticed you’ve mainly were involved in documentaries and some TV work. How did you get involved with your first feature film?
I came from a background of doing documentaries and I also came from a fashion and beauty background. I met this producer, Laura Eason, who saw my work and she thought I would be interested in doing a film. I had this idea as making a strong female character in the city who has this background of dealing with a change that puts her against the wall, per se. We gathered the idea of having this strong character putting her life in perspective and fighting to change. So, we did the script and brought to life many things that would make this character both vulnerable and strong as she struggles then feels empowered to fight this life-altering change.

That’s great! And what definitely made this film great is the cast. I mean from Sarah Jessica Parker in the lead to an ensemble supporting cast from Common to Simon Baker and Renee Zellweger to a legend in Jacqueline Bisset. What were they like on the set?
This was a great cast! They really gave it their all, especially Jacqueline, who is actually British but she lived in France for a long time. We purposely had her speak French in the film, especially with her scenes with Sarah’s Vivienne. They knew we wanted to do things from a woman’s standpoint and they worked so well together in their scenes.

Sarah especially was great. She is such a wonderful actress and one thing I wanted to bring out were her blue eyes. So I would start the film with this close-up of her opening her eyes because I wanted to show that we were going to see her life, from her viewpoint. The eyes are the windows to life and we wanted to show that and then the very last shot are her eyes as they close.

We had only sixteen days to shoot the film, but I will say, this cast really gave it their all. They were ready every day and they just got the job done. So I am very proud of them.

Aside from the sixteen day shoot, being a limited time, were there any other difficulties you faced during shooting?
Well, this is the difference between documentary and feature films. It is mainly the schedule because here, you don’t have much time to rehearse. You have to get the scene shot, then rush. We didn’t have much time to look over everything until we completely finished. With the schedule we had to shoot, then rush. Shoot, then rush. You just have to make sure you everything done right and that can be quite a task, get the right angles and set-ups. It was important to shoot at the right moments without any complications and it was be quite resonating. It was quite an experience for me. It is important for a film like this to capture the emotions but in a short amount of time.

Well, as this was your first feature film, would you consider doing another down the road?
Well, that’s quite a question. I’ll be honest, this was an experience. Don’t get me wrong, I did enjoy making the film. But I think right now, I would like to continue making documentaries because I like to capture that reality and emotional of the subjects. I did add some elements that I would use as a documentary filmmaker into this film and it was great. My idea is to grab the eye of life and to do that, you have to do it right and just set up the cameras and get the shots in, but not so much feeling rushed. But, yeah, I would like to eventually do another feature film where I can employ more of the documentary feel to the story should the opportunity come.

That would be amazing! Here and Now is now out in select theaters, VOD, and Digital HD. This is definitely one for those who look to find themselves in a better place despite all obstacles with such powerful performances. Thank you again Fabian for talking about the film.
Thank you so much!

A special Thank You goes to Katrina Wan PR and Fabien Constant for making this interview possible.