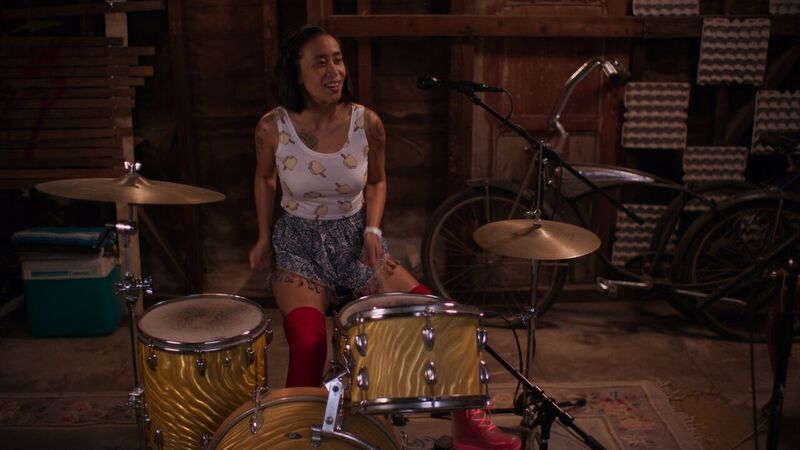 A woman finds a new outlet to overcome her addictions in this dramedy that features original songs from its co-star.

Joy is a woman who has a major problem. The co-host of a children’s TV show, she finds herself in a stable relationship with co-star and boyfriend Ben. However, her biggest issue involves being promiscuous. She sleeps around despite her relationship and it has reached a point where Ben has gotten fed and gives Joy an ultimatum. She either gets help or she must move out. Her first attempt starts out promising until she ends up with a party and wakes up the next day not remembering anything.

Fed up, Ben breaks up with Joy and evicts her from his apartment. On top of that, Joy loses her job at the television station. Having no other choice, she turns to rehab leader Maddie, who the day before Joy asked to be her sponsor. After careful thinking, Maddie decides to let Joy stay in her grandmother’s home with rules to be intact. When Joy sees a drum kit in the garage, she attracts the attention of Jim, Maddie’s neurotic brother who at first kicks Joy out of the garage. However, he sees potential and has Joy become his drummer for his aspiring music career. The two soon forge a bond that may have Joy do the one thing she has always wanted: to be a better person.

From director Suzi Yoonessi and producer Mark Duplass comes this real-life inspired film based on the experiences of its lead star Charlene de Guzman. As Joy, the central character, the role brings out the best in de Guzman, who was at one point a competitive dancer and is a real-life avid drummer. The film also brings the turbulent addictions she had faced that would lead to her learning how to drum and as a result, finds herself finally at peace. This role is truly a tour de force for the young actress, who also co-wrote the film.

John Hawkes brings great support in the role of the neurotic Jim, who has aspirations to be a musician. At first, he sees Joy as a problem, but soon finds her to be a reliable asset as he teaches her to become a stable drummer. At the same time, Joy finds Jim to be a reliable asset to her overcoming her addictions. Oscar winner Melissa Leo also brings support as Maddie, the woman who unexpectedly brings Joy and Jim together but still worries as she sees Joy possibly relapsing with her own brother. However, it is clear that the chemistry between Joy and Jim is not so much a love bond as it is two people who are willing to help each other overcome their issues.

The songs performed by Joy and Jim are quite a highlight themselves. It may come as a surprise to some, but John Hawkes actually has written the songs himself. One song will really get your groove going and that is “Time Traveler”. It is such a catchy song that after seeing this film, may just never go away and you may not want to let it get away. It has an indie rock tune in the vein of perhaps a Weezer or Redd Kross to name a few. The ending credits even give the viewer a treat with a music video of the song.

Unlovable is a wonderfully told story of two people bonded with issues involving emotional love and find each other through the power of music with great performances by Charlene deGuzman and John Hawkes, with the latter’s songs being a fun highlight of the film.

The film comes to select theaters on November 1, followed by a VOD/Digital HD release on November 2.