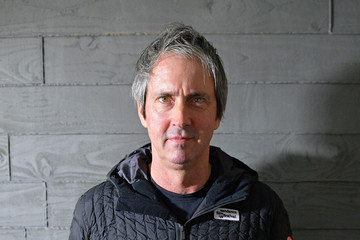 Jonathan Watson has risen through the filmmaking ranks as a second assistant director and then an assistant director. He has worked on projects such as Grumpier Old Men, Bad Boys, and Shanghai Noon, and Bruce Almighty over the course of nearly three decades. He finally makes his long-awaited directorial debut on the dark comedy Arizona, starring Danny McBride and Rosemarie DeWitt. The film comes to theaters, VOD, and Digital on August 24 from RJLE Films.

World Film Geek had the opportunity to talk to Watson about the film.

Thank you so much Jonathan for talking about Arizona. I watched the film last night and I either laughed like crazy or kept my jaw dropping. This was a great dark comedy.
Well, thank you very much. I’m so happy you enjoyed it!

You’ve worked on various films as an assistant director for over two decades. Now, here you are making your directorial debut. What attracted you to make this film?
Well, I have through the years have come close to directing. I was always with a razor blade’s length of making a film, but it would always fall apart. Sometimes these things that you realize can disintegrate like sand castles. And I would just shutter up my aspirations and go back to ADing (assistant directing), which I love. I always loved making movies and television.

It was Danny McBride. I worked as an AD on Eastbound and Down and then, he had asked me to work as executive producer on Vice Principals. I started directing on that and there was a scene in the climax of the second season, or the last season, we’re watching a tiger being lead into a South Carolina high school to start this end sequence. And as we were watching this large cat being led in by his trainer, he told me the story of Arizona.

He gave me the script and he told me to take a look at it. And he said I should direct it and he will take the lead role. All we had to do now was casting. So that’s how it all began.

That’s awesome. And speaking of Danny McBride, this was one of his craziest roles in my opinion and he has done his share of crazy roles. What was he like on the set of the film?
Well, I will tell you this first. I have worked with very difficult people but I’ve also worked with awesome people. I’ve worked with the best and I’ve worked with the worst. I’ve seen the gamut from painful to magical.

Danny is the best. He’s such a good person. He’s warm and generous and he loves to play against his type to play these aberrant characters and part of what we knew what to do. We decided to test the viewer. We’ve watched Danny in both Eastbound and Down and Vice Principals and even when he is at his worst behavior, the audience stays with him. We were going to use that and crush that reality. We were going to cross that line and see if the audience will still stay with him. That’s what we planned out.

And I will tell you, I loved it. It is like he goes from “What did I just do” to “I’m going to keep rolling with it and I don’t care what it takes”.
(Laughs) It is homicidal vamping!

Aside from McBride, there are also great performances by Rosemarie DeWitt and Luke Wilson and features extended cameos from the likes of Seth Rogen, David Alan Grier and Kaitlin Olson. What were they like on the set because I can imagine with their known flair for comedy, there must have been quite a few laughs on the set?
Oh as dark as tortured as this material can be, we had a ball. We shot the film in 21 days and not a lot of money and that can be oodling humorless. I mean you have the crew rates, shooting 14 to 16 hours a day, they can be death marches. I’ve been on a couple of them.

This was not one of them. We shot 12 hours a day. The crew was wonderful. From day one, the cast was onboard. They were the gift that I am forever fortunate for. They were hilarious. Katilin Olson came in blasting like a jet engine when we shot her scenes. She couldn’t be lovelier. Luke Wilson, I mean when you meet him, he’s like that buddy you remember from high school. He just clicked and he couldn’t be nicer and cooler. Even David Alan Grier. He’s the epitome of funny and cool.  It was such a joy. Liz Gillies was amazing. There wasn’t a cast or crew member who I had a single problem or had to fire.

I just pretty much went, this is the movie, this is what we’re going to do. I’ll tell you as quick as I can, whether you flew in the night before or morning of, or during a phone conversation. And then it’s like we have seven pages to shoot today and we’re off. So it was go go go. (Laughs) As crazy as it was, it was a lot of fun.

What would you say was the toughest part of the shoot?
We had some locations set in Alberquerque and we talked to the New Mexico Film Commission. We were going to find some shuttered subdivisions and a busted golf course. When we were ready to shoot, we found out the subdivision was fully occupied. However, the golf course we did find was in fact busted. It was all runover and haywire. That was real.

The subdivision, however, was fully occupied with the exception of a few plots that weren’t built. So, we had to convince the folks with very little money. Because if you were an A-list movie, it would be much easier to get them out and we couldn’t do that. We had to have meetings with the location manager and HOA, trying to tell them we were nice people and tell them that we would have to shutter their places and only use part of the day so they can go back to their homes.

We had to use 4 x 8 sheeted of foam core, printed in plywood, then we taped them to their garage doors. So it is like they are now shuttered and painted to look derelict (laughs).

It sounds like you had a great experience as a director. Would this be something you will continue to pursue?
Oh definitely. I am actually looking at ideas to see what my next film will be.

Arizona comes to theaters, VOD, and Digital HD on August 24. If you are a fan of dark comedies and/or fans of Danny McBride, then you definitely have to see this film. Thank you again Jonathan for talking about the film.
Thank you so much and I am glad you enjoyed the film!

A special Thank You goes to Katrina Wan PR and Jonathan Watson for making this interview possible.