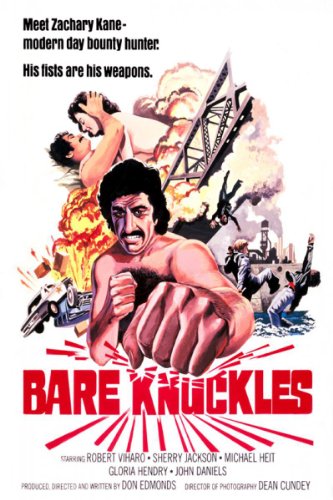 Don Edmonds directs, produces, and writes the screenplay for this “so bad it’s good” cult classic.

The story follows Zachary Kane, a bare knuckles fighter who moonlights as a bounty hunter. While he gets the job done, the police are not exactly thrilled with Kane’s methods. After rescuing a young socialite, Jennifer Randall, Kane’s morale begins to rise as the two begin a romance.

However, all of that is about to change. When Black (John Daniels) hires Kane a bounty of fifteen thousand dollars, Kane learns of his job. A mysterious masked man has been targeting and killing random young women. The man in question is Richard Devlin, a wealthy rich boy who had just left a mental ward with a hatred for women. Upon his return, he began training in martial arts, thus allowing him to make his killings almost quick and easy. When Devlin targets Jennifer as his next victim, Kane’s job has become personal and he is ready to stop Devlin at all costs.

This film was made on the heels of the classic kung fu films in the United States. After Enter the Dragon was a hit, American filmmakers began churning out their own brand of martial arts films. Enter Don Edmonds, who had hoped to launch an action star in Robert Viharo.

What is interesting in casting Viharo in the central role of fighter/bounty hunter Kane is that he breaks the cliché of the muscle bound/tough guy action hero or skilled martial artist. Viharo looks more like a regular Joe who could pass for Gabe “Kotter” Kaplan’s long lost twin brother. He does hold well in both the subpar theatrics and action scenes. On the other side of the spectrum, Michael Heit tends to overdo it as killer Devlin. While he does well in the school of overacting, his mask makes him look like a reject from an S&M club.

There’s plenty of action in the film. The marvelously named Leo Whang took charge of the “kung fu sequences” of the film. Seriously, the opening credit reads “kung fu sequences”. The problem is that with the exception of a brief fight with Whang, who cameos as a potential victim’s husband, and a training sequence between the killer and his mentor, the fight scenes are poor. Even the climactic fight between Kane and Devlin is disappointing. It is even more sad that they had an abandoned train yard as the environment. In most cases, this would provide more room for action, but it just falls flat here.

However, with an 1970’s American action film titled Bare Knuckles, this is to be expected. It truly is “so bad that it’s good”.