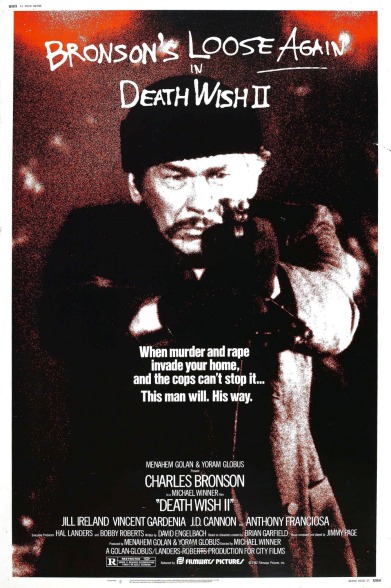 Charles Bronson returns to the role that made him an action icon eight years later, reuniting him with director Michael Winner.

Paul Kersey has moved on with his life and now lives in Los Angeles. While working his day job as an architect, he has brought his daughter Carol, who has slowly improved due to the assault she suffered in New York, to a mental facility. Paul has even found love again with journalist Geri. When Paul, Geri, and Carol go out to a festival for the day, Paul finds himself mugged by five thugs, who steal his wallet. Later that day, they go to Paul’s house and viciously assaults and murders his housekeeper.

When Paul returns home with Carol, he is knocked out and Carol is both kidnapped and assaulted again. This time, the devastating effects of the assault forces Carol to take her own life when she attempts to escape the thugs. When Paul has learned what has happened, he decides to do what he never imagined he would do again: get revenge. This time, he plans to target just those responsible for Carol’s death. As he hunts the group down one by one, L.A.P.D. begin to worry of the vigilante attack and bring in N.Y.P.D. detective Frank Ochoa as a liaison. Ochoa knows the score, and hopes it is not the same person he once had to stop in New York.

Who would have thought that the classic would get a sequel, let alone four? One can thank the Cannon team of Menahem Golan and Yoram Globus for that. They would make the legendary Charles Bronson an action icon in the 80’s with the sequels, beginning with this 1982 sequel that’s set actually four years after the original. Where the original had Bronson going after all sorts of criminals, this sequel becomes a standard revenge thriller but somehow it still works thanks to David Engelbach’s script, which even allows for Bronson to get some witty one-liners in before offing his victims. Even Jimmy Page’s score helps drive the film and brings that Cannon-style music that would dominate the action films during the 80’s.

This time around, Bronson is joined by real-life wife Jill Ireland as new love interest Geri, who has not a single clue about his nightly activities while Vincent Gardenia makes a welcome return as Detective Ochoa, who comes to Los Angeles as a liaison and has a pretty good idea what is going on and who is responsible. Surprisingly, things take quite a twist for the detective when he sees Bronson possibly being ambushed. Ben Frank’s Inspector Mankiewicz is equivalent to that of Ochoa in the original as he seeks the means to find the vigilante hitting the L.A. streets. This time around, look for Laurence Fishburne pre-Matrix and Pee Wee’s Playhouse fame as Cutter, one of the thugs responsible for the deaths.

The action scenes once again consist of Bronson mainly using his sharpshooting skills yet there are parts that allow him to use the environment as his arena of weaponry. It may not be in the vein of a Jackie Chan obviously, but for a 60-year old Bronson, it works out quite well. A highlight involves the aforementioned ambush scene and a finale that has to be seen to be believed when it comes to the last thug standing.

Death Wish II is quite a fun action-packed sequel with Charles Bronson front and center seeking revenge only this time around. However, for its 80’s style action, this is one definitely worth checking out.