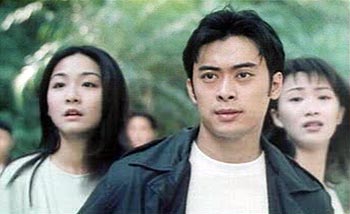 Hong Kong has always been known to churn out some frenetic kickboxing style action in their films. This action packed film from Golden Sun Films, a company known for its lower budgeted kickboxing action films, is an underrated film in terms of fight scenes despite a lackluster finale that borders on the ridiculous.

Former gangster Tong has just been released from prison for the accidental death of a rival’s family. Upon leaving the prison, he is kidnapped and left for death but his rival’s son Tiger, one of the two lone survivors of the family. When Tong’s friend Fu arrives, he makes a solemn promise to raise Tong’s daughter as his own and not to seek revenge on Tiger. When Tong dies, Fu keeps his solemn vow and runs a floral shop with Tong’s daughter Min and his daughter Jen.

However, Tiger has not forgotten Fu’s involvement in his family’s tragedy and decides to kill Fu, Min, and Jen. When he sends his girlfriend Shelly and his henchmen to make the hit, tae kwon do and wushu instructor Kau Hwa is at the wrong place at the right time. He ends up saving Fu and his family but surprisingly, when during a fight with Shelly, she nearly is impaled, Kau saves her. Showing some respect towards Kau for saving her, Shelly temporarily lets them all go.

When Tiger kidnaps Fu and tortures him, Kau makes the save after another duel with Shelly, who may seem like one of the bad guys, but it is clear she does have a conscience and lets Kau leave with Fu, who stays to recuperate. However, Tiger tries again by kidnapping Min, who reveals herself as Tong’s daughter. Kau engages in a sword spar with Shelly (yes, again), and when she loses, she lets them go.

Tiger learns of Shelly’s treachery and responds by beating her. Meanwhile, Tiger is somewhat impressed by Kau’s martial arts skills and hires two fighters to find and kill Kau. The first is David, an expert in Muay Thai kickboxing. The second fighter is Long, an expert in the art of Ninjitsu.

It is without a doubt to many Hong Kong fans that Fan Siu-Wong, aka Louis Fan, is one of the most underrated martial arts action stars there is today. After breaking through with the Category-III film Story of Ricky, Fan would work on some A-list Hong Kong flicks such as Project S, but he would end up being relegated to lesser fare such as this film and other films such as The Boxing King and Shadow Mask. This is clearly one of Fan’s best films in the B-movie circuit as he unleashes some impressive tae kwon do and wushu style swordplay.

Throughout the film, fans may keep wondering why there are constant duels between Fan Siu-Wong and Kim-Maree Penn. The answer soon becomes obvious. Shelly may be the girlfriend of villain Tiger, but she has a deep respect for the martial arts and finds Kau as a worthy opponent with impeccable martial arts skills. The duo engage in not one, not two, but three frenetic fights, from hand-to-hand combat to a weapons duel to a swordfight. While Fan’s skills are top notch, Australian-born Penn definitely has made her mark in Hong Kong as a stuntwoman and villain actor. This is one of her best roles as she definitely shows why she is a force to be reckoned with both on and off screen, as she is currently a bodyguard in Hong Kong.

Billy Chau and Collin Chou are definitely action stars who got their mark taking on the cream of the crop, from Jackie Chan to Sammo Hung. Here, they play more in extended cameos as two top fighters hired by bad guy Tiger to kill Kau. Billy Chau, a former World Kickboxing Association and muay thai champion, uses his skills in the ring to the screens nicely in his fight against Fan. However, some may feel that their fight in the forest was just a little short with Chau falling for the good ol’ boot to the chin move.

As for Chou, if fans thought his villain role as Jade Warlord in the 2008 film The Forbidden Kingdom was somewhat effeminate, they have not seen this film. Chou plays the feminine type to a tee, using effective skin twisting moves on Fan and then somewhat scaring the viewer when he describes Fan’s muscle bound figure as “very firm”. That may make one wonder, but no fret. Chou’s kicking skills in his fight speak for themselves.

As mentioned, the film ultimately suffers from a lackluster finale. In a twist, just when you think the movie is over, it is not. The result is a poor mismatched fight pitting Kau against Tiger’s brother, played by an American stuntman who looks like Tony Hawk with a mushroom cut. Furthermore, to be honest, I can’t even think of why this was the end of the film. It should have just ended with all being okay instead of the bad fight in the end. This last “surprise” was a complete dud and practically ruined the integrity of the film.

Overall, The Death Games is definitely an underrated Hong Kong action film with Fan, Penn, Chau, and Chou at the top of their game in terms of their action scenes despite a thematic plot that has been beaten to death. The final fight was truly a waste of time and was just flat out mind-numbing.