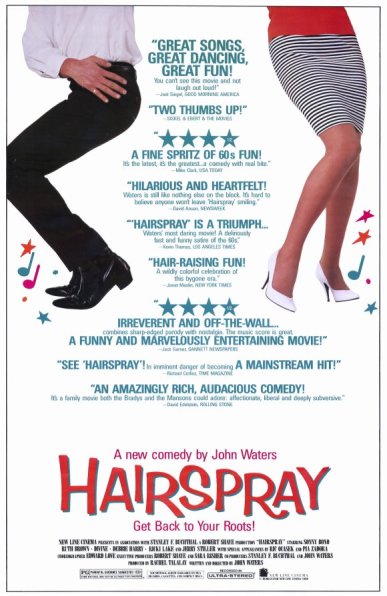 One of the indie greats, John Waters, enters the mainstream with this tale of civil rights and dance shows in 1960’s Baltimore.

It is 1962 Baltimore. The local dance show that brings the “nicest kids in town” was the Corny Collins Show. Plump teen Tracy Turnblad has had a dream to go on the show. Despite negative pressure from old school mom Edna, Tracy finally lives her dream and decides to take it a step further.

At a time where Baltimore was segregated by white and black, Tracy, along with the help of her new boyfriend Link, best friend Penny, and Penny’s crush Seaweed, she decides to do whatever it takes to make sure that Baltimore has integrated dancing. Dance show host Corny Collins even wants his show to be integrated, but the station manager will not allow it. Furthermore, Tracy’s arch nemesis on the dance floor, Amber Von Tussle, will do anything to make Tracy’s life hell.

This was the first breakout film for Waters to a real mainstream audience, despite the film being released by New Line Cinema, an independent label (at the time) best known for releasing horror films like the Nightmare on Elm Street series. Waters pulled out all the stops for this film, which surprisingly is his most “family-friendly” film. With Waters being the “King of Bad Taste”, what would be the inspiration for this very film?

The answer is clear and simple. In the late 50’s to early 60’s, there was a dance show out of Baltimore called The Buddy Deane Show, which like this film depicts, featured a committee of the most popular dancers on the show. Yes, the show was also segregated with one day a month given only to African-Americans. All of what occurred during that era is basically seen in the film, of course the only way John Waters could do it.

First, Waters breaks the stereotype of dancers and their physiques with the introduction of the film’s main protagonist, overweight teen Tracy Turnblad. Ricki Lake was perfectly cast as the young teen who was not only willing to make her dreams come true, but perhaps those of Baltimoreans who wanted equal rights. Waters brought out not one but two positive messages with his breaking the worlds of segregation and weight discriminations through the world of dancing.

Joining the young fresh cast were veterans of the entertainment industry. The late Sonny Bono and Blondie lead singer Debbie Harry were seen as antagonists Franklin and Velma Von Tussle, the parents of teen priss Amber. Ruth Brown played the very vocal and music lovin’ “Motormouth Maybelle”, who happens to be Seaweed’s mother. In his final film, Waters favorite Divine turned out a spectacular performance or performances as both Edna Turnblad and WZZT manager Arvin. Jerry Stiller played joke store owner Wilbur Turnblad, Tracy’s dad who couldn’t be more proud of his daughter and her amibitions.

The film proved to be so popular that it would be made into a Broadway musical (with Waters’ approval) and a 2007 remake based on said musical. The remake featured John Travolta as Edna Turnblad, Michelle Pfeiffer as Velma, Christopher Walken as Wilbur, and Queen Latifah as Motormouth Maybelle. The film, like Ricki Lake in the original, introduced newcomer Nikki Blonsky in a welcome debut as the new Tracy with Amanda Bynes as Penny and Zac Efron as Link.

In the end, Hairspray is a fun and at times, serious look at a time where racial inequality and the world of dance shows were both the rage. However, some great performances and the storytelling shows why John Waters found the right time to break into the mainstream. Look out for his cameo as Penny’s “hypnotherapist”. It’s a hoot!