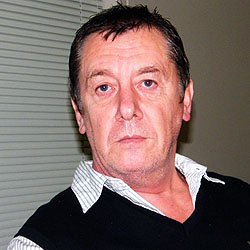 Michael Ashton is a playwright and screenwriter from Dundee, Scotland. After serving in the British Army, he studied law and became a legal counselor specializing in human rights. In 2008, after battling drug and alcohol abuse, Ashton was convicted of fraud, which landed him in prison for 18 months. Determined to turn his life around and to redeem himself, Ashton took a screenwriting course in prison. He has since written over 30 plays including the award-winning ‘The Archbishop and the Antichrist,’ which has since been adapted into a screenplay, The Forgiven, which was released in select theaters, VOD, and Digital HD this past Friday.

World Film Geek had the chance to talk to Ashton about his first screenplay and the personal inspiration of both the film and his original stage play.

First of all Michael, thank you so much for talking about The Forgiven. I found this to be a very powerful and emotionally driven film.
Well, thank you very much! I didn’t go to South Africa for the filming. I’m quite high in the Asperger’s field that leaving my house can be difficult. So I didn’t go when they were filming. Instead, my ex-wife Kim, who is also my manager, went to the filming. When I saw the film for the first time at the London Film Festival, I thought the final courtroom scene involving Horné Visser (as Hansi Coetzee) and Thundi Makhubele (as Mrs. Morobe), I mean wow. If the film was just that three or four minutes alone, I’d have been happy with that.

I was quite surprised to learn that this was based on a play you wrote, The Archbishop and the Antichrist. What inspired you to write a stage play about post-Apartheid South Africa?
Well, you must know that I went to prison. While I was in prison, I wasn’t going to waste my time. I took a Master’s Degree in Research Methodology. My thesis was actually on the Truth and Reconciliation Commission in South Africa. For free, once a week, I attended a play writing course. The people who ran the course, Synergy, they wanted you to write something for the end of the course.

And unlike the other guys in the class, I didn’t want to write about cooking and bitches (laughs). I wanted to write about what brought people to prison. When I was sent to prison, I was an absolute wreck. And I was a wretched creature. I mean, what caused me to commit my offenses? Because I was a practicing lawyer. I was completely gone for years on alcohol and drugs. I had destroyed every relationship you can imagine. I mean nobody wanted to know me. When I went to prison, I didn’t get any letters, visitors, nothing.

When I started to think about what I was going to write about, I was racked by guilt, tormented by guilt. I started to wonder about forgiveness and redemption. How do you deal with these issues? And when you are sitting in a prison cell by yourself, you only got yourself. So, when I started to write, I wanted to write something meaningful. And I realized that Desmond Tutu, was overlooked. You have films about Nelson Mandela, but Desmond Tutu, the man who worked hard and was in the front line for many years, was overlooked. Hence my story.

And of course, I had to invent a protagonist for Tutu and that was the white supremacist Piet Blomfeld. And curiously, I must have done a good job because a lot of people think he’s real. And of course, he’s not (laughs).

I thought he was real. It was that convincing to me!
Well, I invented him. I don’t even know if I’m real (laughs).

You got to work with a renowned director in Roland Joffé, who co-wrote the screenplay for the film. How did you two meet and what was it like collaborating with him on the film?
It was absolutely fantastic! I loved Roland and I think he reciprocates. He’s a very special human being. He liked the stage play and I was introduced to him by Tony Calder, who in the 60’s and 70’s had managed The Rolling Stones, The Small Faces, Peter Frampton, and others. He introduced me to Roland and we started working on the screenplay. It was mind-blowing working with Roland. He’s a very careful and cautious person. Despite the fact he had secured Forest Whitaker for the film in 2011, he didn’t really want to get into the nitty-gritty of shooting the film until he was absolutely ready.

I’ve written a lot of stage plays across the U.K. and won numerous awards. My last stage award was last May, so transitioning from the stage to the screen, was not easy. Roland is a very patient and kind man, so he was able to help and he overlooked some indiscretions. For instance, having Asperger’s, I tend to fire off and I sent e-mails to people and getting all riled up (laughs). I told them I was never speaking to any of them again, ever (laughs). The following day, I sent another e-mail apologizing and Roland tends to forgive all of that. He would point out what wasn’t cinematic so we cherry picked the dialogue scenes, which were quite long in the film from the stage play, but that was from Roland’s excellent, spaced-out, guidance.

When it comes to plays, I get introduced to the actors on day one and then after the read through, they don’t want me to come back (laughs) because of the fear that if they change the dialogue, I will get mad (laughs). Roland’s patience with me is boundless. 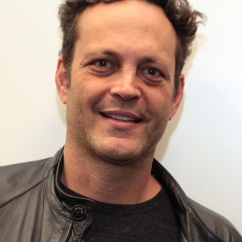 Were you involved in any casting of the film? I felt Forest Whitaker and Eric Bana (above left) gave such powerful performances in the film. Personally, I thought this was Eric Bana’s best role.
Kim, my ex-wife and manager, Roland, and Craig Baumgarten (producer) asked me who I wanted for the roles and they said, brilliant! (Laughs) Eric was right up there because I just loved his first film, Chopper. He played a chopper and his character was in prison for a while in the film. I actually have a couple of Chopper posters. Eric was right up there by choice but I suggested two actors.

The other actor I wanted was actually Joaquin Phoenix (above center). So I wanted Joaquin and Eric. It was brilliant when Eric took the part. Vince Vaughn (above right) wanted to play Blomfeld, but I couldn’t see him in that role. I do love him to death. He was brilliant in Get Cool, the sequel to Get Shorty, but I just couldn’t picture him in this role. So, when Eric took over, I was so pleased. I think either Eric or Joaquin could have played the role.

I could see Joaquin but I felt Eric had a slightly better advantage with the role. Again, this was one of his best roles in my opinion.
I actually spoke to Eric after one of the performances at the London Film Festival and when you’ve actually written something and you see it come to life in film or on the stage, it is hard for the writer to appreciate an actor of Eric Bana’s stature to where you tell them that this was the kind of role actors would kill each other to play.

This is your first feature film as a screenwriter and this was based on your stage play. Are there any more of your plays that you would consider adapting into film or do you have any new projects in the works?
Yes, for KS Productions, we are developing a six-part mini-series called Billy Wild, about the rise and fall of a 60’s pop star. This will be a joint US-UK production. We also have a feature film called The Gates of Sleep, which we have a director lined up and that’s pretty advanced as well.

The Forgiven comes to theaters, VOD, and Digital HD on March 9. This is a powerful and emotional film that should be watched, especially for its theme and performances by Forest Whitaker and Eric Bana. Michael, you did a great job with the material and I thank you again for talking about the film.
Thank you so much!

A special Thank You goes to Katrina Wan PR and Michael Ashton for making this interview possible. For more on Michael, check out the KS Productions website for more information.